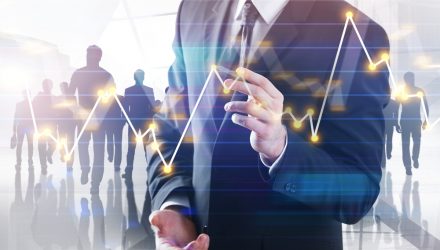 Equity market volatility isn’t off the charts. Not yet, anyway, but it’s perked up enough in the first quarter that some market participants are evaluating strategies aimed at mitigating that turbulence.

In the world of exchange traded funds, there are a variety of related options, including some surprises such as the VanEck Vectors Morningstar Wide Moat ETF (MOAT). As its name implies, MOAT is an ETF focusing on companies with noteworthy competitive advantages, but the fund has other traits that make it a credible avenue for reducing portfolio volatility.

Interestingly, when broader equity benchmarks swooned in January, MOAT did something that dedicated low-volatility ETFs are designed to do: perform less poorly than traditional equity funds. MOAT accomplished that objective with the help of some holdings that were laggards in 2021.

The Morningstar Wide Moat Focus Index, MOAT’s underlying index, “finished January well ahead of the S&P 500 Index, with defensive characteristics on display. The Moat Index posted a loss of -2.27% for the month, almost half of the S&P 500’s loss of -5.17%. Some of the Index’s outperformance can be attributed to its style exposure, notably its underweight to growth and overweight to value,” said Brandon Rakszawski, VanEck senior ETF product manager.

One of the reasons that MOAT can act as a legitimate buffer against elevated volatility is that many of its 46 holdings are quality stocks. Low volatility and quality are two separate investment factors, but the latter often shares traits with the former.

Look at MOAT this way: When the broader market slides, it’s often lower-quality, “junkier” companies, many of which are overvalued, leading the declines. Those aren’t accurate descriptors for MOAT holdings. Rather, the ETF’s member firms are attractively valued firms that are profitable and sport strong balance sheets.

“By nature of investing in companies with competitive advantages that are also attractively priced, the Moat Index has historically offered attractive risk and return characteristics through market downturns. From its live inception in February 2007, the Index has provided attractive relative returns paired with impressive drawdown performance,” adds Rakszawski.

MOAT further reduces risk by not allocating any more than 3.25% of its weight to any of its holdings, indicating that it’s not highly vulnerable to single stock issues. The fund devotes 24% of its weight to technology stocks, while the healthcare and industrial sectors combine for 31.8% of its roster.