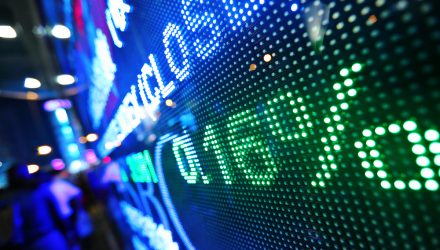 “To be considered for inclusion in the Morningstar Wide Moat Focus Index, a company must have a Morningstar Economic Moat Rating of wide, which means our equity research team believes the company has advantages that will help fend off competitors for at least 20 years,” said Morningstar in a recent note.

MOAT’s index rebalanced in late March, which could prove advantageous for investors because it allowed the benchmark to add some undervalued companies to its roster.

“Index reviews during market volatility and sell-offs have, at times historically, benefited the index. Most recently, the Index allocated to many oversold semiconductor companies at the end of December 2018. Many of those companies helped fuel 2019 outperformance,” according to VanEck.

Bank of America “has effectively cut costs by selling off many risky business segments. The company has also increased its consumer loan standards, so most customers now have high average credit scores,” said Morningstar.

MOAT currently allocates about 56% of its combined weight to the healthcare, financial services and technology sectors. Those groups are home to some of the strongest balance sheets and most impressive dividend growth track records in Corporate America.

Constellation’s moat was recently moved to wide status “given the strength of its Mexican beer business, which generates approximately 80% of its profits. We believe this business segment has a strong brand given U.S. consumers’ increased affinity toward imported beer. Plus, the beer resonates with a growing U.S. Hispanic population,” according to Morningstar.