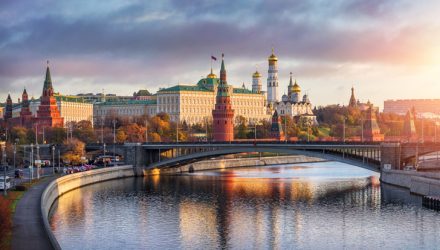 Why This Russia ETF is a Real Winner

The VanEck Vectors Russia ETF (NYSEArca: RSX), the largest Russia ETF trading in the U.S., is up more than 28% year-to-date, topping the widely followed MSCI Emerging Markets Index by a margin of better than 3-to-1.

Of course, when discussing Russia and RSX, oil is part of the conversation. Energy stocks represent over 40% of the fund’s portfolio and oil’s recent rebound is playing a major role in RSX’s month-to-date gain of more than 11%.

“Drone strikes forced Saudi Arabia to shut down half of its crude production (roughly 5% of the world’s daily production of crude oil). Under such conditions, oil suppliers from other countries became beneficiaries,” according to Seeking Alpha. “Judging by the current dynamics of the Russian stock market, investors believe that Russian oil companies will be able to increase oil production to make up for the missing volumes from Saudi Arabia.”

Russian crude oil producers have also seen revenue from rising oil magnified due to the weakening ruble currency as crude oil is priced in U.S. dollars, which helped the industry achieve record-breaking revenue and shrink debts. While Russia is a dominant oil-producing and is pumping crude at post-Soviet era records, there is more to the economic story there.

There are also geopolitical considerations, as is usually the case when considering Russian assets. This time around, there could be positive implications as Russia and Ukraine move toward cooling off long-standing tensions between the two countries.

“On September 7, the prisoner swap between Ukraine and Russia took place, which inspires hope for the resumption of dialogue between Moscow and Kyiv. More than that, the so-called Normandy format talks between Ukraine, Russia, France, and Germany may take place at the end of this month,” reports Seeking Alpha. “These events potentially increase the likelihood of lifting at least part of the European sanctions against Russia in the foreseeable future.”

With a yield of 4.24%, RSX is enticing for risk-tolerant income seekers as the fund’s dividend yield is nearly double that of the emerging markets benchmark.