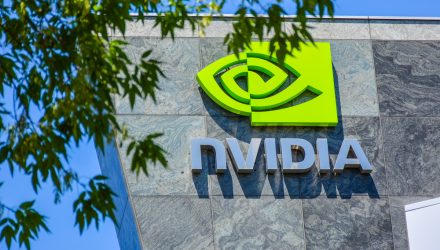 Why Nvidia Is My “Slam Dunk” Investment for the Decade

What was the most important financial event of 2020? Most folks would tell you it was the coronavirus pandemic and the economic devastation caused by government lockdowns.

But that’s wrong. For investors, the most life-changing thing that happened last year has to do with computer chips. In 2020, for the first time ever, the value of the computer chip industry surpassed that of the oil industry. The 30 largest semiconductor companies are now worth $2.5 trillion combined. Compare that to $1.7 trillion for the 30 largest oil firms.

This sent an important signal to investors. Oil is no longer the most important resource is the world. Computer chips are. Longtime RiskHedge readers know computer chips, also called semiconductors, are the “brains” of electronics.

There would be no iPhone, Amazon Webstore, or online messaging apps without them. Temperature sensors in air conditioners are powered by tiny microchips. Rice cookers cook rice to perfection because built-in semiconductors control the heat. The chip inside pacemakers sends electrical pulses to the heart to keep it beating regularly.

From flying across oceans to hailing a ride on our smartphones when we land, streaming movies to buying stuff online, checking out groceries to paying for dinner with your credit card: every modern system runs on chips.

You can’t grab a packet of microchips off the shelf at Walmart. But the latest cameras, TVs, washing machines, ovens, and refrigerators are all made “smart” by semis.

Last year, there were 300 billion computer chips sold. For perspective, we consumed roughly 34 billion barrels of oil last year. The five largest chip companies are now worth over $1.4 trillion combined. And chip stocks are ripping higher:

Semiconductors Are The Most Valuable Goods The World Has Ever Known

It took a staggering 498 people to prepare dinner for King Louis XIV. The French king was the richest of the rich, in the world’s wealthiest city at the time. What if I told you the average American today is “better off” than the 17th century king?

You likely don’t have a personal tailor like Louis did. But you can buy all kinds of clothes on the internet and have them dropped on your front porch in a few days. Louis travelled in a golden carriage with a personal chauffeur. You can fly to hundreds of destinations the king never dreamed of visiting.

Modern life is made possible by semiconductors. As I said, without them the internet and smartphones wouldn’t exist. Even airplanes rely on computer chips these days. They control autopilot, monitor jet-engine performance, and even measure the aircraft’s temperature.

A few weeks back, I wrote about a disruptor called Butterfly Network (LGVW). Butterfly invented a “beard shaver” shaped instrument that transforms any smartphone into an ultrasound machine: 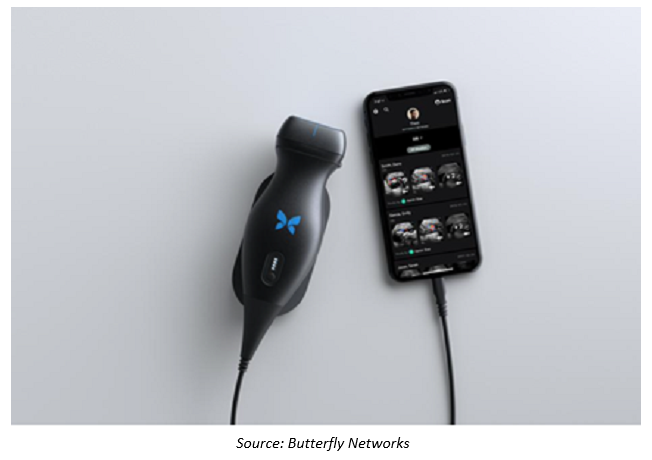 How the heck did it achieve this act of “magic?” Traditional ultrasound machines use piezoelectric crystals, which turn electrical energy into vibrations in the form of ultrasonic waves. In short, this makes the machines bulky and expensive.

Butterfly’s world-class engineers reinvented how ultrasounds work and squeezed the technology onto a tiny chip. This is why their tech is called Ultrasound-on-Chip. Aeva (IPV) is achieving similar breakthroughs with self-driving cars. Aeva is one of the world’s top LIDAR companies.

LIDAR sensors that resemble a lawn sprinkler are affixed to the roof and front grill of the self-driving car. These sensors then send out roughly 160,000 pulses per second in all directions. And they can detect the smallest detail, like a leaf blowing in the wind. Aeva shrank the size of its sensor by 1,000X by bolting all the functions onto a semiconductor: 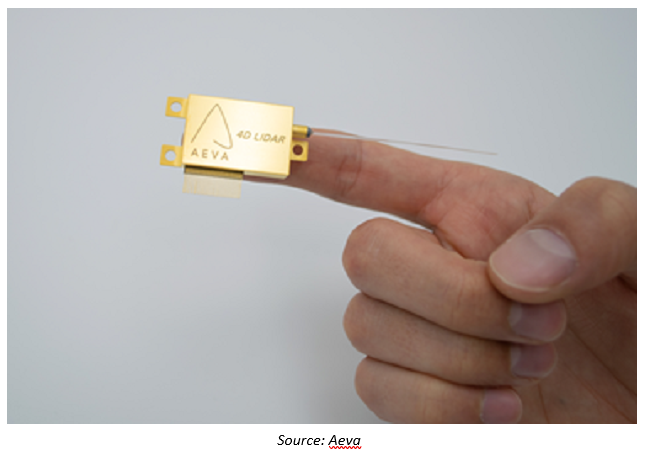 This helped Aeva slash the cost of a LIDAR sensor to roughly $500. That’s far cheaper than the tens of thousands of dollars you’d pay for the current top-of-the-range sensors.

Chip companies are expected to rake in a record $470 billion this year. And all these future disruptions will likely push that well above $1 trillion. 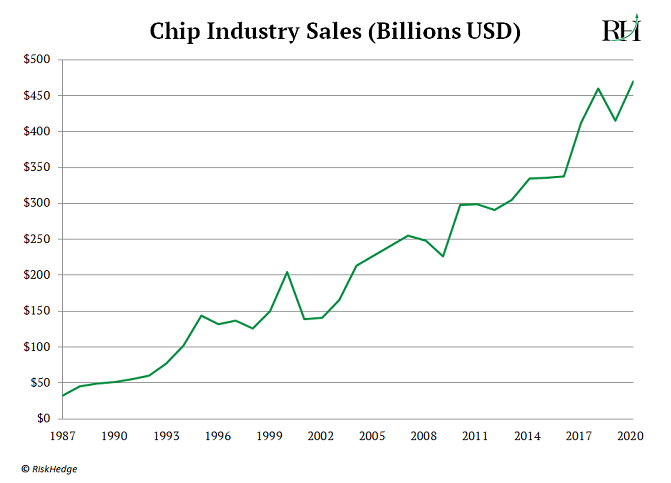 A good exercise when sizing up a stock is to ask, “Could the world survive without this company?” The answer for the vast majority of firms is “Yes, we’d do just fine.” But if we woke up tomorrow to find NVIDIA (NVDA) had disappeared, the world would be a much worse place.

NVIDIA pioneered a new type of chip called graphics processing units (GPUs) back in the 1990s. GPUs were specifically made to improve video game graphics. But the disruptor achieved a major milestone in 2020. For the first time, artificial intelligence-related sales were its largest business. In the last three quarters, its AI business raked in $4.8 billion.

NVIDIA Is The “Brains” Behind The Most Important AI Projects

I first recommended NVIDIA back in 2018. As I said at the time, if I could buy only one stock for the next five years, NVIDIA would be it. The stock has doubled since then, and it’s headed much higher in the coming years. That’s why it’s a current buy in my Disruption Investor advisory.

Last year, NVIDIA took the mantle of “America’s largest chipmaker” from Intel for the first time ever. This kicks off a new era, and my research suggests it will be one of world’s 10 largest companies by 2025. Investing in leading chipmakers like NVIDIA is the surest way to make money over the next decade.