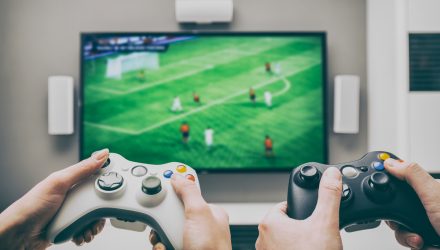 Video game stocks, like other growth and technology names, are encountering headwinds early in 2022, but the long-term outlook for the VanEck Vectors Video Gaming and eSports ETF (NASDAQ: ESPO) remains compelling.

“Video game and esports stocks are uniquely positioned for the current market as shelter-in-place orders remain in effect. Across the industry, analysts have noted a sharp increase in video game and esports engagement, from people playing games to viewership numbers,” according to VanEck research.

Owing to the fact that Sony (Playstation) and Microsoft (XBOX) are large companies with sprawling enterprises, Nintendo is the only major console maker on ESPO’s roster. However, the fund is full of game publishers (software producers), including Activision Blizzard (NASDAQ:ATVI), Electronic Arts (NASDAQ:EA), and Take-Two Software (NASDAQ:TTWO).

“In our view, video gaming and esports present a compelling investment opportunity, and we believe a pure play approach is the best way to access this opportunity,” adds VanEck.

A big part of the long-term gaming opportunity is mobile gaming, and ESPO components are aware of that. Last week, Take-Two announced that it’s acquiring “FarmVille” producer Zynga Inc. (NASDAQ:ZNGA) for $12.7 billion. The buyer and the seller combine for about 8% of ESPO’s weight. It’s possible that this deal will stoke more mobile gaming consolidation.

“Looking ahead, the combined company is expected to deliver a 14 percent compound annual growth rate for net bookings (excluding the annual net bookings opportunities and any future acquisitions) over the three-year period from Take-Two’s fiscal years 2021 through 2024,” according to a statement issued by both companies.

Investors considering ESPO shouldn’t overlook the esports opportunity set. Among younger demographics, esports are at least as popular as traditional sports. Television ratings reflect as much. Additionally, some experts believe that esports can grow in popularity as more jurisdictions permit regulated wagering on the competitions.

“Esports viewership continues to grow and set new records, driven in part by the rising population of digital natives. An eNASCAR race broadcast on Fox and Fox Sports 1 on March 29, 2020 drew over 1.3 million viewers, making it the most watched broadcast TV esports event in history,” notes VanEck.