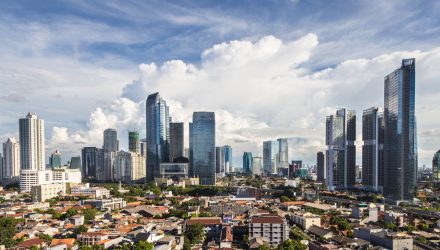 Global struggles with the pandemic may be opening up opportunities for investors seeking international exposure to value-oriented countries. Indonesia is working hard to get the pandemic under control, and the VanEck Vectors Indonesia Index ETF (IDX) is worth a closer look.

With a vaccine rollout underway, the hope is that most countries will return to some sense of pre-pandemic normalcy again.

As far as Indonesia itself goes, according to a recent CNBC article, the country “will take at least a year before a sufficient portion of its population becomes immune to Covid-19, the country’s Finance Minister Sri Mulyani Indrawati told CNBC and stressed the need for the government to keep spending to support the economy.”

“We see that the pandemic is not declining, and we need to keep vigilant on that,” Sri Mulyani told CNBC during coverage of the World Economic Forum’s Davos Agenda.

“Indonesia launched its Covid-19 vaccination program earlier this month after approving for emergency use the vaccine developed by China’s Sinovac Biotech,” the article added further. “Sri Mulyani said conservative estimates by experts showed Indonesia needs about 15 months to vaccinate around 180 million people in order to reach ‘herd immunity.’ That occurs when enough people in a population develop protection against a disease such that it can no longer spread easily.”

IDX seeks to replicate as closely as possible, before fees and expenses, the price and yield performance of the MVISÂ® Indonesia Index. The fund’s expense ratio comes in at 0.57%.

The fund normally invests at least 80% of its total assets in securities that comprise the fund’s benchmark index. The index includes securities of Indonesian companies.

The fund’s current sector weightings tilt towards financials, followed by materials and consumer staples. With the fund up about 23% the last few months, the allocations appear to be paying off.

One development that could give IDX a boost is the rise of financial technology (fintech). A KrASIA article noted that “as fintech matures, 2021 is also expected to become a key year for the digital banking sector in Indonesia, which could give impetus to the country’s financial inclusion, according to industry insiders.”