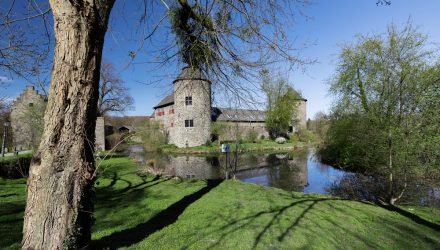 VanEck On The Current Consistency of Moat Strategies

Powerful moats can be built on several primary sources, which can lock customers into a company’s unique ecosystem, provide a competitive advantage, increase a product’s value, or allow for a level of market control that is worth looking into.

ETF Trends spoke with Brandon Rakszawski, Senior ETF Product Manager at VanEck, who noted some areas that have been popular, as well as successful during times where concerns for volatility is considered an understatement. Dividend ETFs have had a lot of advisor interest, but there’s enough to say about moat strategy as well.

Currently, some of the most popular strategies are dividend growth strategies. These tend to have a lot of asset growth, whether it’s a shorter-term look-back on dividend growth trends, or the aristocrat approach of looking 25 years into the past, which shows concern that some of those older strategies will shrink in the current environment, as companies are forced to cut or suspend dividends altogether. There’s been a good amount of that, so the next couple of weeks should be telling as to what’s coming next.

Fortunately, there’s also the state of moats to look at. The term “economic moat” describes a company’s ability to maintain its competitive advantages and defend its long-term profitability. This is researched through five primary sources, including switching costs, intangible assets, network effect, cost advantage, and efficient scale.

As recently detailed by Rakszawski, the “network effect” describes the phenomenon where the value of a product or service increases as the number of its users grows. This tracks with the world becoming more digitally inclined, which, in turn, makes it a reliable moat source. Rakszawki provides further details for “intangible assets,” “switching costs,” and the other key sources as well, which further exemplifies why they remain good sources for moats.

Al of this is to say moat investing is in a good position. As Rakszawski explains, “VanEck’s U.S. moat strategy has held up well through a lot of this volatility. It continues to perform very well against peers.”

He continues by noting Morningstar is currently in the process of publishing a research paper on the underlying index to Moat and how it has done following down market periods, and what has been the trend over the 10+ year life history of the index. This should show many details following periods of volatility and downsides. As of now, with uncertainty playing a large role in everything, at least it can be said moats are working.