You are at:Home»Beyond Basic Beta Channel»Value Emerging in This Tech ETF 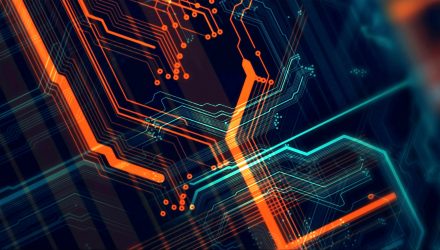 Value Emerging in This Tech ETF

Technology stocks are among the worst performers, and semiconductor names aren’t being spared that punishment. In fact, they’re contributing to the sector’s woes.

For example, the VanEck Vectors Semiconductor ETF (SMH) is lower by 26.11% year-to-date. However, investors who missed out on previous bull markets for chip stocks may be getting an unusual opportunity with SMH today — one marked by some of the exchange traded fund’s marquee holdings not being as richly valued as they were last year and relative to their histories.

“On the technology front, semiconductors companies like Nvidia and AMD, which have experienced their fair share of the sell-off amid ongoing supply shortages, also made the cut. Nvidia and AMD shares have plummeted more than 44% and 35%, respectively, this year,” reported Samantha Subin for CNBC.

Nvidia (NASDA:NVDA) and Advanced Micro Devices (NASDAQ:AMD) combine for nearly 13% of SMH’s weight, and the former is the fund’s second-largest holding. While those are hefty declines mentioned above, both chip giants are attractively valued relative to historical names.

“Both Nvidia and AMD are trading at deep discounts to their historic P-E ratios,” according to CNBC.

The pair of semiconductor names appears on a CNBC list of deeply discounted S&P 500 stocks currently trading at massive discounts to historical P/E ratios. In the case of AMD, its current forward P/E ratio of 21.1x is a 46.5% discount to the norm. Regarding Nvidia, that stock trades at 28.8x forward earnings, which is a 27.6% discount to its long-term average.

“The strategy owns 25 securities and is quite concentrated. More concretely, 59.1% of the strategy’s assets are housed within the top 10 holdings, versus the category average of 44.8%. And in closing, in terms of portfolio turnover, on a year-over-year basis, 20% of the fund’s holdings have turned over, whether through increasing, decreasing, or changing a position,” according to Morningstar research on SMH.