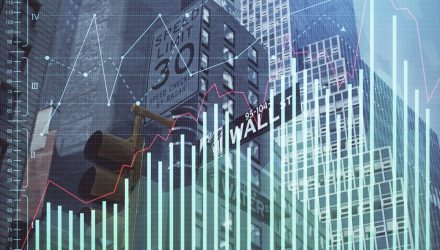 The VanEck Vectors Morningstar Wide Moat ETF (MOAT) is coming off a solid 2021 in which in the exchange traded fund gained more than 24%, suggesting that there’s something to the combination of attractively valued companies with strong competitive advantages.

MOAT, which tracks the Morningstar Wide Moat Focus Index, topped the S&P 500 in December, and with plenty of market observers wagering on upside for value equities this year, the ETF’s methodology could pay off for investors in 2022. That doesn’t mean that MOAT doesn’t have something to offer for growth investors; it certainly does.

By focusing on wide moat companies, MOAT departs from traditional value funds and includes more quality attributes than standard value funds. One example of that is a combined 42% weight to technology and healthcare stocks — both of which are associated with quality and competitive wide moats, but often aren’t associated with being homes to an array of inexpensive stocks.

Owing to the points of quality being important and moats being a primary criteria for entry, it’s not uncommon for MOAT to add stocks that are just fairly valued. Take the case of industrial firm Honeywell (HON).

“Honeywell has long traded at a premium to Morningstar’s fair value estimate, which has excluded the company from the Moat Index in years past,” notes Rakszawski. “However, following the release of the company’s third quarter results, Morningstar raised Honeywell’s fair value estimate to $225 per share from $211, opening an opportunity for Honeywell’s price/fair value ratio to qualify for inclusion in December.”

Another example of a fair value adjustment paving the way for entry into MOAT is Latin American e-commerce giant MercadoLibre (NASDAQ:MELI).

“Shortly following the early November fair value estimate revision, MercadoLibre announced a one million share equity issuance, which drove selling pressure on the stock. Unlike the broader market, Morningstar did not view the announcement as negative, but rather as similar to a historical pattern from MercadoLibre and maintained its increased fair value estimate,” concludes Rakszawski.