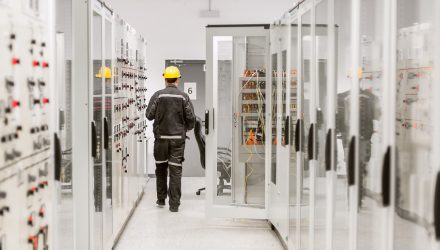 Stocks tumbled on Friday, but the utilities sector stood tall. Utilities, traditionally a safe-haven sector, lived up to that reputation on Friday when the Utilities Select Sector SPDR (NYSEArca: XLU), the largest utilities ETF by assets, and rival utilities ETFs ascended to record highs.

Utilities ETFs hitting all-time highs has been a regular event in 2019. To be precise, six utilities ETFs, including XLU, hit record highs on March 22.

With inflation relatively under control and benchmark Treasury yields still stuck around 3%, utilities remain attractive for yield hunters. Moreover, after the recent bout of volatility, investors are still still looking at the bond-esque sector as a safe way to remain the game and generate some extra dividends on the side.

“Utilities are usually considered a safe choice with stable returns, unlike the tech companies that have been driving most of the stock market’s growth over the past decade,” reports Evie Liu for Barron’s. “But as the market pulled back significantly last year, even steady gains can become top-notch performance.”

The utilities sector is one of the most rate-sensitive groups in the U.S. equity market, meaning the group stands to benefit the longer the Federal Reserve holds off on its next interest rate hike. Better yet would be an interest rate cut, something some bond market observers believe is a possibility late in 2019.

“Lower rates for longer would be good for bond-like stocks such as utilities. Typically, lower bond yields indicate a weakening of economic growth, which makes defensive sectors with stable dividend income—such as utilities—more attractive than cyclical ones as investors seek protection against losses,” according to Barron’s.

Investors have added $12.15 million to XLU this year.