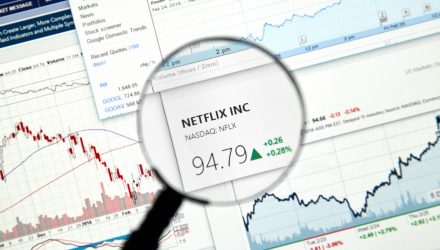 Use This Internet ETF as a Netflix Proxy

Due in large part to its status as a premier stay-at-home play,  Netflix (NASDAQ: NFLX) is one of this year’s best-performing stocks, a trend benefiting select ETFs, such as the Invesco NASDAQ Internet ETF (PNQI).

PNQI seeks to track the investment results (before fees and expenses) of the NASDAQ Internet IndexSM. The fund generally will invest at least 90% of its total assets in securities that comprise the underlying index. The underlying index is designed to track the performance of the largest and most liquid U.S.-listed companies engaged in Internet-related businesses that are listed on one of the three major U.S. stock exchanges.

Among US-listed ETFs, PNQI has the largest weight to the streaming entertainment stock – one that’s approaching 11%, and these days, that’s a plus for investors.

“Netflix has weathered the COVID-19 storm extremely well compared to competitors such as Disney,” said GlobalData in a recent note. “Netflix’s market capitalization, at market close on 21 April, was $190.4bn, which is higher than Disney, Exxon, and IBM, and up from $142bn on 31 December 2019. It has also announced quarterly results that show it added 15.8 million subscribers in the three months to the end of March 2020, which is up from the 8.8 million it gained in Q4 2019.”

With large states, such as California and New York, implementing shelter-in-place policies, some analysts and market observers believe internet retailers and related companies are poised to benefit, potentially providing an assist to ETFs such as PNQI.

Helped by coronavirus quarantine orders, Netflix added 15.8 million subscribers in the first quarter, bringing its total to almost 183 million. With that in mind, it’s not surprising that PNQI is beating the both the Nasdaq-100 and S&P 500 year-to-date.

“These strong financials are reflective of GlobalData’s position on Netflix, which has been positive since the outbreak of COVID-19,” said GlobalData thematic analyst Danyaal Rashid. “The company believes that Netflix will do well out of this crisis as more people will be taking up subscriptions and existing customers will be retaining their contracts. Netflix is ranked second in GlobalData’s music, film, and TV thematic rankings, behind only Amazon, and has received a rating of four out of five for the coronavirus theme – the joint highest rating.”

“In contrast, Netflix’s rival Disney has suffered as a result of the pandemic. In the music, film, and TV thematic rankings, Disney has fallen three places to tenth, having been awarded a score of two out of five for its ability to deal with COVID-19,” said Rashid. “Disney’s market cap has fallen from an all-time high of $273bn in late November 2019 to just $181.5bn at market close on 21 April 2020.”