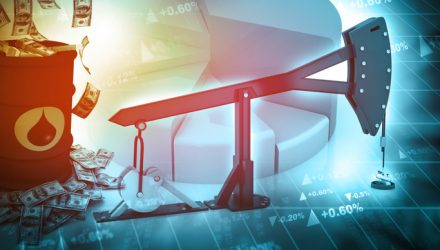 This Oil Service ETF Could Bounce Back

OIH, the largest oil services ETF, is lower by nearly 20% this year. The $621.7 million OIH tracks the MVIS U.S. Listed Oil Services 25 Index, “which is intended to track the overall performance of U.S.-listed companies involved in oil services to the upstream oil sector, which include oil equipment, oil services, or oil drilling,” according to VanEck.

As a cap-weighted oil services ETF, OIH is dominated by two names: Schlumberger (NYSE: SLB) and Halliburton (NYSE: HAL). Those stocks combine for 31.41% of the fund’s roster. That makes OIH vulnerable when those names decline, but the fund offers rally potential if those stocks rebound.

Deutsche Bank analyst Chris Snyder “sees a rebound in U.S. shale exploration in the second half of 2020, which should benefit the big oil-services companies, including Halliburton (HAL) and Schlumberger (SLB). Companies that help offshore producers drill more efficiently should also profit,” reports Avi Salzman for Barron’s.

“Halliburton is the dominant player in U.S. shale services, an area that has been hurt because producers are spending less on new projects. Its stock is down 23% this year after falling 46% in 2018. Snyder doesn’t expect an immediate rebound, but he does see producers spending more on oil services to maintain production,” according to Barron’s.

The expected global supply glut is also the latest threat to the Organization of the Petroleum Exporting Countries and other producers, which have already enacted production caps in an attempt to stabilize prices and balance the market. Predictably, geopolitical headwinds factor into the oil equation. Fortunately, more supply cuts could be in the offing. Schlumberger’s international exposure could help that OIH component rebound.

“International oil field service (OFS) markets are firmly in recovery mode, signaling the start of a much needed multi-year growth cycle,” notes Deutsche’s Snyder. “Schlumberger is the primary beneficiary of this with nearly four times the international earnings power of its nearest competitor.”