You are at:Home»Beyond Basic Beta Channel»This Emerging Markets Country Looks Oversold and Like a Rebound Play 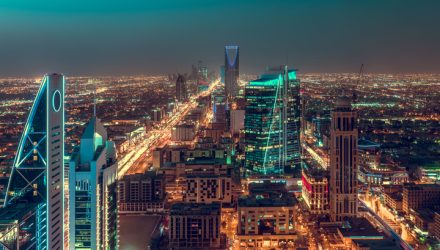 This Emerging Markets Country Looks Oversold and Like a Rebound Play

Amid heightened geopolitical tensions and declining oil prices, the iShares MSCI Saudi Arabia ETF (NYSEArca: KSA) is enduring punishment in the early stages of 2020, but the kingdom’s economy is likely to remain sturdy and that could be a foundation for a rebound by KSA.

KSA seeks to track the investment results of the MSCI Saudi Arabia IMI 25/50 Index. The index is a free float-adjusted market capitalization-weighted index with a capping methodology applied to issuer weights so that no single issuer exceeds 25% of the index weight, and all issuers with a weight above 5% do not cumulatively exceed 50% of the index weight.

“Saudi Arabia’s GDP growth is projected to see an upturn this year, due mostly to progress in growth in the non-oil sector, central bank Governor Ahmed Alkholifey said,” reports Bloomberg.

The kingdom’s efforts to diversify its economy are vital because as the largest producer in the Organization of Petroleum Exporting Countries (OPEC), the country remains highly sensitive to crude’s price movements.

In light of falling oil prices, the Saudi kingdom, Kuwait and the United Arab Emirates, which combined makeup over half of OPEC’s production capacity, convened this week to discuss a possible output cut of as much as 300,000 barrels a day, the Wall Street Journal reports.

Recently, Saudi stocks were added to major emerging markets benchmarks, signaling that the market there is opening to foreign investors.

The decision to include Saudi Arabia into MSCI indices came after consulting international institutional investors, and it was made possible, following a number of regulatory and operational enhancements in the Gulf state that improved market access to potential foreign investors.

“Growth this year will be faster than in 2019, ‘especially in the private sector,’ the Saudi Arabian Monetary Authority governor told reporters during a conference in Riyadh,” according to Bloomberg.

The central bank governor is also seeing growth in mortgage lending and loans to small businesses, which is relevant to KSA because the ETF allocates 44.80% of its weight to financial services stocks, by far its largest sector weight.

KSA holds 72 stocks. At 25%, materials is the second-largest sector holding.