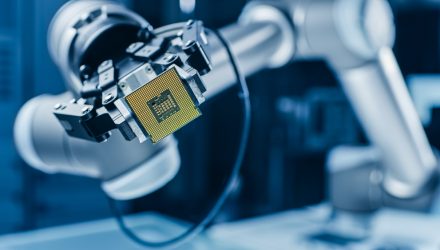 Those market participants may also think of Taiwan Semiconductor (NYSE:TSM), which is another SMH holding and the dominant chip foundry operator. However, many investors forget about semiconductor materials companies, several of which reside in the SMH portfolio.

What’s interesting about chip materials names is that like so many growth stocks, the group is sagging this year and is now less expensive on valuation than it has been in quite a while.

“But there is another way to play the latest trends in technology: the handful of major companies that supply semiconductor manufacturers with the tools and equipment they need to make the chips themselves. And with many of these stocks having fallen faster than the broader equity market this year, they offer investors a chance to pick up these names at their lowest valuations in over a decade,” noted Morningstar analyst Lauren Solberg.

Among the undervalued semiconductor materials stocks is ASML (NASDAQ:ASML). That name is the sixth-largest holding in SMH at a weight of almost 5%, according to issuer data.

“ASML, a global corporation specializing in photolithography machines used to make microchips, has fallen 40.1% this year as of June 17. The company is currently trading at about half of its fair value estimate price. The stock hasn’t been this undervalued at any point since Morningstar analysts began covering the company in 2004,” added Solberg.

Lam Research (NASDAQ:LCRX) and Applied Materials (NASDAQ:AMAT), which combine for almost 9% of the AMAT roster, are two more examples of undervalued semiconductor equipment stocks. Citing robust intangible assets by way of its wafer fabrication equipment design expertise, Applied Materials fits the bill as a wide moat stock, according to Morningstar.

“Applied’s scale and resources allow a research and development budget in excess of $2 billion to serve cutting-edge technologies and thus benefit from inflections such as fin field-effect transistors, or FinFET, and 3D NAND,” noted Solberg.

“In our opinion, Teradyne’s ability to design testing equipment for bleeding-edge chips is the biggest driver of its competitive advantage, representing intangible assets that we don’t think are easily replicable. Teradyne provides testing solutions for nearly every semiconductor on the planet during production, both at the wafer level and final device package level,” said Morningstar analyst William Kerwin.