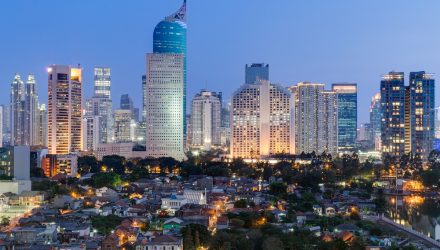 Country-specific exchange traded funds that track Philippines and Indonesia’s markets were among the worst performers on Monday as the two Southeast Asian economies braced for prolonged coronavirus shutdown measures to contain a resurgence in infections.

Meanwhile, the Philippines said it will put its capital Manila back on stricter lockdown measures after Covid-19 cases jumped following the rollback of previous shutdown measures. President Rodrigo Duterte approved a proposal to tighten restrictions in metro Manila and nearby provinces for 15 days after doctors suggested another round of lockdowns to get a grip on a spike in infections that has overwhelmed the health care system.

“This is unlikely to stop the sell-off by investors,” says Manny Cruz, strategist at Papa Securities Corp. “There is perception that a localized lockdown will not work anymore and a more stringent quarantine is needed since the infection is no longer in cluster but community wide. This could derail the expected third-quarter recovery.”

Looking ahead, Indonesia is scheduled to report second-quarter GDP growth on Wednesday, but economists warn of a 4.7% contraction in the economy, or steeper than the 4.3% estimated by President Joko Widodo.

“Some investors are pulling out of the equities market as they speculate that the second quarter GDP may come in worse than what the government expected,” Isnaputra Iskandar, head of Indonesia research at Maybank Kim Eng Securities, told Bloomberg. “The worst might be behind us, but how strong the recovery will be remains in question.”