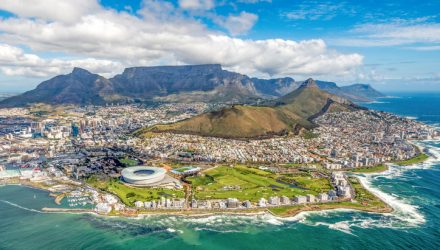 The iShares MSCI South Africa ETF (NYSEArca: EZA) is off more than 5% this year, a performance that’s far worse than broader emerging markets benchmarks and there could be more trouble brewing for riskier assets in Africa’s largest economy.

South African companies have been struggling to turn out a profit as strained consumers reduced spending and faced a weak growth outlook amid continued political uncertainty. Consequently, many believed monetary stimulus by a typically cautious central bank may be the only short-term solution, but with the rand weak, stimulus may not be in the offing.

Conversely, expectations that the economy there is poised to weaken this year could force the central bank to act stave off a possible credit downgrade. Some market observers are concerned Moody’s Investors Service could downgrade South African debt next month.

“Moody’s, which is scheduled to review South Africa’s Baa3 credit rating in March, said the country’s lackluster economic performance was due to domestic challenges rather than external factors such as the coronavirus,” reports Bloomberg. “A downgrade by Moody’s would see South Africa lose its place in investment-grade indexes, sparking outflows from its bond and stock markets.”

Curiously, EZA hasn’t benefited much from the ongoing surge in palladium, a commodity of which South Africa is the world’s second-largest producer.

South African stocks, along with the rest of the emerging markets, have suffered from a stronger U.S. dollar as the returns were lowered when converting from local currencies back to the U.S. dollar.

South Africa’s economic weakness raises the country’s risk profile in a time when emerging market assets are under pressure from a strong U.S. dollar and escalating global trade tensions. Furthermore, some observers are concerned it may increase the chances of a credit downgrade.

“Recent economic indicators suggest that industrial activity in South Africa remains weak amid low business and consumer confidence, while recurring power outages have weighed on manufacturing and mining output, Moody’s said in a report,” according to Bloomberg. “The company lowered its forecast for gross domestic product growth to 0.7% in 2020, from 1%, and predicts expansion of just 0.9% in 2021.”

EZA tracks the MSCI South Africa 25/50 Index and allocates 62% of its combined weight to the financial services and consumer discretionary sectors.