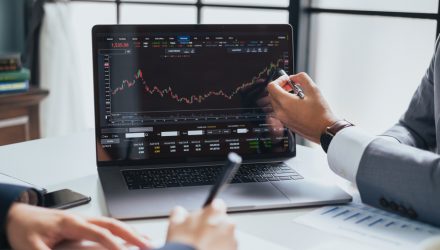 Technology stocks are rarely inexpensive. The same goes for companies with the wide moat designation, particularly those residing in the tech sector.

However, amid the recent drubbing being endured by technology equities, some names from that sector that are holdings of the VanEck Vectors Morningstar Wide Moat ETF (MOAT) are now attractively valued.

To be fair, the aim of MOAT, which tracks the Morningstar Wide Moat Focus Index, is to identify wide moat stocks, regardless of sector, that are sporting compelling valuations. That’s a tall order for investors to manage on their own, underscoring the value of MOAT’s index-based approach. Indeed, there are some good deals to be had among MOAT’s technology components, including Microsoft (NASDAQ:MSFT).

“Microsoft made headlines recently, as the second-largest company in the world announced a $69 billion deal to acquire Activision Blizzard, a video game developer known for games such as Candy Crush, Call of Duty, and World of Warcraft,” says Morningstar analyst Jakir Hossain in a recent note. “Microsoft has already been a leading player in the video game industry, and analyst Dan Romanoff does not see the deal as transformative. The tech slide dragged down Microsoft shares by 12% in recent weeks, leaving it trading at a 14% discount.”

Another example of a MOAT tech holding that now looks interesting on valuations is government software provider Tyler Technologies (NYSE:TYL), which is a wide moat name by way of high switching costs.

“There is a decade-long runway for normalized 10% top-line growth at Tyler, especially as demand for software-as-a-service accelerates and the need to modernize local governments’ legacy enterprise resource planning systems intensifies,” says Romanoff.

“Blackbaud’s wide moat is in part attributable to high switching costs, as well as intangible assets in its essential fundraising, donor-management, financial management, and related solutions, according to Romanoff. The company trades a 20% discount to its fair value,” adds Hossain.

The aforementioned stocks combine for 7.25% of MOAT’s weight. The ETF’s overall tech weight is 25.5%, by far its largest sector exposure.