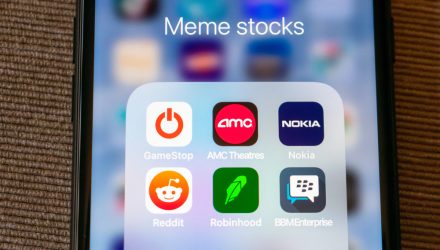 It feels like meme stock mania is ebbing, and while that might be true, investors shouldn’t be hasty in writing off some of the names that fueled the retail trading revolution over the past couple of years.

For example, GameStop (NYSE:GME) and AMC (NYSE:AMC) are again showing signs of life, and that could prove beneficial to the VanEck Vectors Social Sentiment ETF (BUZZ). In the case of GameStop, shares of the video game retailer are higher by a jaw-dropping 60% over the past week.

“GameStop is enjoying a strong rally this week as traders got a vote of confidence when chairman Ryan Cohen bought additional 100,000 shares of the video game retailer. However, the move made many scratch their heads as the Chewy co-founder hasn’t detailed any concrete plans for the ecommerce transformation. Meanwhile just last week, GameStop posted an unexpected loss for the holiday quarter,” reports Yun Li for CNBC.

When it comes to BUZZ, renewed enthusiasm for GameStop and movie theater operator AMC is relevant because those are the VanEck exchange traded fund’s top holdings, and those stocks combine for 6.49% of the fund’s roster.

For its part, AMC is higher by 30% over the past week despite its recently announced baffling purchase of a small gold mining company.

Beyond that, there are some interesting factors that could bode well for BUZZ, including the facts that some meme stocks are perking up amid a trying market backdrop and many investors that bought these names in 2020 and 2021 are still holding them.

“A recent survey from Ally Invest found that more than 80% of investors who bought meme stocks in the last 12 months still own them, and over half of them said they would buy more of those shares again,” according to CNBC.

Adding to the allure of BUZZ is the fact that the ETF isn’t dependent on high risk/reward names like GameStop and AMC. Rather, the fund is home to a surprising number of stocks offering quality traits. That group includes, but isn’t limited to, Nvidia (NASDAQ:NVDA), Amazon (NASDAQ:AMZN), Apple (NASDAQ:AAPL), Salesforce.com (NYSE:CRM), and Microsoft (NASDAQ:MSFT).

The 75 holdings in BUZZ range in weights of 0.35% to 3.29%, indicating that single-stock risk is relatively benign in the fund.