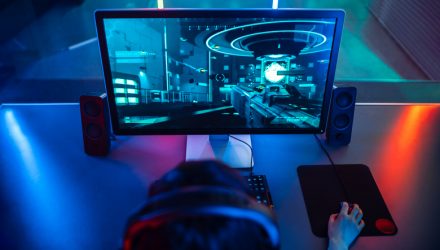 Software Could Be Super For eSports ETF

The VanEck Video Gaming and Esports ETF (ESPO) is becoming the stuff of legend among video game ETFs thanks in large part to the fund’s exposure to the booming e-sports market. However, some of the more traditional aspects of the video game business, including hardware and software, are also relevant to ESPO’s performance.

“We expect companies with high-quality franchises and development capabilities will continue to attract large audiences, and further fragmentation of distribution should generally prove positive for the economic moats of the four game publishers we cover: Activision, EA, Take-Two and Ubisoft,” Morningstar said in a recent note.

Those four stocks combine for over 20% of ESPO’s roster, according to VanEck data.

ESPO “provides targeted access to the largest companies involved in developing and publishing video games, esports, and related hardware,” said VanEck in a recent note. “The resulting portfolio is global, with heavy representation from the U.S. and Asia. Some of the names in the portfolio are more well-known than others. Most investors are probably already somewhat familiar with Tencent, Nvidia, and Nintendo. Here are a few other names that might be flying under the radar.”

Some ESPO software holdings continue to look attractive, particularly with new franchise installments due out soon.

“We believe the video game publishers we cover are fairly valued to undervalued despite our neutral view, relative to the market’s positive view, concerning the impact of subscription plans and cloud gaming and our slightly higher concern level about the potential of the regulation of microtransactions,” Morningstar said. “We prefer Activision Blizzard given its more diversified revenue by platform, strong core franchises, and potential upside from its larger exposure to esports.”