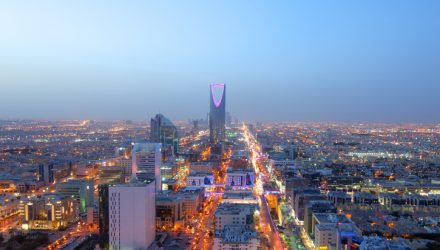 Once one of this year’s best-performing single-country ETFs, the iShares MSCI Saudi Arabia Capped ETF (NYSEArca: KSA) is clinging to year-to-date gains as it resides about 16% below its 52-week high.

The first Saudi Arabia listed in New York is now contending with another headwind: a downgrade to the Kingdom’s credit rating by Fitch Ratings. Fitch lowered its rating on Saudi debt to A from A+ with a stable outlook.

“The downgrade reflects rising geopolitical and military tensions in the Gulf region, Fitch’s revised assessment of the vulnerability of Saudi Arabia’s economic infrastructure and continued deterioration in Saudi Arabia’s fiscal and external balance sheets,” said the rating agency in a note out Monday.

The shift in billions of dollars reflects the growing importance of index providers in guiding investment assets across financial markets. Inclusion in widely tracked benchmarks has acted as a catalyst for active fund managers to buy stocks to keep up with the indices they try to beat while passive funds automatically invest in these markets by design.

However, recent geopolitical headwinds are weighing on Saudi assets.

“Recent drone and missile attacks on Saudi Arabia’s oil infrastructure resulted in the temporary suspension of more than half of the country’s oil production,” according to Fitch. “Although oil production was restored fully by end-September, we believe that there is a risk of further attacks on Saudi Arabia, which could result in economic damage. We have revised our assessment of the vulnerability of Saudi Arabia’s economic infrastructure to regional military threats as a result of the most recent attack.”

Related: Why Investors Should Look to an Emerging Market E-Commerce ETF

The kingdom is also home to widening fiscal deficits, which played a role in the Fitch downgrade.

“Saudi Arabia’s continued fiscal deficits are a contributing factor to the downgrade,” according to the ratings agency. “We forecast a fiscal deficit of 6.7% of GDP in 2019, from 5.9% of GDP in 2018, reflecting an underlying loosening of fiscal policy in 2018-2019, and lower average oil prices and production. We assume that the Brent oil price will average USD65 per barrel (bbl) in 2019 (from USD71.6/bbl in 2018) and that Saudi Arabia’s oil production will average 9.7 million bbl/day (from 10.3 million bbl/day in 2018).”