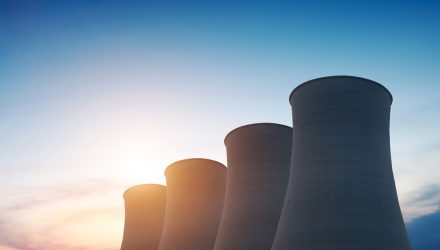 Generating power from renewable sources is all the rage in today’s capital markets. An alternate play that doesn’t get enough coverage is the use of nuclear power, accessible through the VanEck Vectors Uranium+Nuclear Energy ETF (NLR).

NLR seeks to replicate as closely as possible, before fees and expenses, the price and yield performance of the MVIS® Global Uranium & Nuclear Energy Index. The fund normally invests at least 80% of its total assets in securities that comprise the fund’s benchmark index. The index includes equity securities and depositary receipts issued by companies involved in uranium and nuclear energy.

Per an ETF Database analysis, “NLR offers exposure to all spots along the value chain for nuclear power, from the manufacture of input materials to operation of power plants. It should also be noted that this ETF is global in nature, with about a quarter of assets going to U.S. stocks.”

“This ETF can be an interesting option for those looking to bet on nuclear power over the long run, with URA and NUCL serving as the closest alternatives,” the analysis added. “URA is more of a pure play on the uranium industry, whereas NUCL may be more appealing from an expense perspective.”

Nuclear power got a vote of confidence from what may be an unlikely source. Per a recent CNBC report, nuclear power will be “‘absolutely’ be politically palatable, billionaire philanthropist, technologist and climate change evangelist Bill Gates recently told Andrew Ross Sorkin on CNBC’s Squawk Box.”

Of course, first, nuclear power will have to fix the stigma attached to it as a dangerous source. Its association with things, such as atomic bombs and radioactive disasters will be a difficult reputation to overcome, but Gates thinks getting over it is an absolute must.

“Nuclear has actually been safer than any other source of [power]generation,” Gates told Sorkin. “You know, coal plants, coal particulate, natural gas pipelines blowing up. The deaths per unit of power on these other approaches are — are far higher,” Gates said, a fact he also references in his new book, “How to Avoid a Climate Disaster.”