You are at:Home»Beyond Basic Beta Channel»Russian Stocks Could Rock Again in 2022 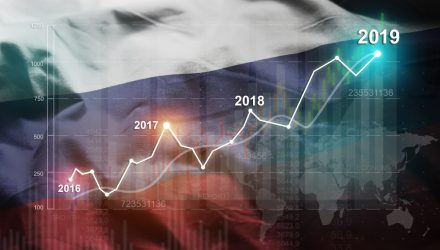 Russian Stocks Could Rock Again in 2022

Supported in large part by surging oil prices, Russian stocks were among the best performers among emerging markets equities in 2021.

For example, the VanEck Vectors Russia ETF (NYSEArca: RSX) returned 10.39% in 2021. Solid but not spectacular, RSX does, however, compare quite favorably with the MSCI Emerging Markets Index, which slipped 5.46% last year.

With many experts and market observers betting on higher oil prices this year, RSX could benefit. After all, Russia is one of the largest crude producers in the world, and it’s part of the OPEC+ group. However, as experienced investors know, Russia is often a tricky market to navigate, and geopolitical risk is always a consideration.

“For all the gains the country’s assets have made in the past 12 months, a military incursion into Ukraine would transform the narrative instantly, analysts say,” reports Bloomberg. “Unprecedented U.S. and European sanctions would leave Russia off-limits to many investors, rendering the benefits of rising commodity prices, record international reserves and the central’s bank’s hawkish turn all but irrelevant.”

Indeed, Russian stocks are proving sensitive to geopolitical tensions. RSX finished 2021 with a fourth-quarter loss of 12.36%, much of it coming amid the aforementioned escalation of troops along the Ukraine border.

Some market observers believe that if Russia proceeds with a full-scale Ukraine invasion or armed conflict, Russian stocks could drop off the radar for many global investors. That might not be a fate that President Vladimir Putin wants to tempt.

“While most emerging-market currencies have weakened against a resurgent dollar in 2021, the ruble has remained resilient, currently little changed from a year ago,” according to Bloomberg.

A military conflict with Ukraine could also disrupt Russia’s domestic financial markets, which could be home to a bumper crop of initial public offerings (IPOs) in 2022.

“At least 10 Russian companies could hold an initial public offering (IPO) in 2022, extending the listing spree that started a year ago if geopolitics, including Ukraine tensions, and other risks do not thwart their plans, bankers and advisors said,” reports Reuters.

The $1.4 billion RSX, which turns 15 years old in April, is home to just 29 stocks and allocates nearly two-thirds of its weight to the energy and materials sectors. That’s reflective of the Russian market as a whole, indicating that some IPOs could contribute to market diversification. RSX investors are hoping that Putin scales back the Ukraine threats and lets markets function without geopolitical headwinds.