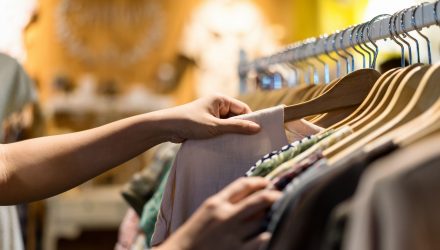 However, some analysts remain enthusiastic about some retailers, noting the group should ultimately prove steady in the face of US/China trade talks. The two sides are expected to discuss trade at the G20 summit next month.

“The concerns about trade are understandable though: Many retailers’ supply chains include China, while still others are counting on the country’s emerging middle class to provide the next leg up in sales growth,” reports Teresa Rivas for Barron’s. “Certainly, some companies would simply raise prices to pass along costs to consumers, but that option may not be available to retailers struggling with weaker demand, and even well positioned players could take a hit if consumers—who remain cost conscious—suffer from sticker shock.”

Home to 25 stocks, RTH tracks the MVIS US Listed Retail 25 Index. The ETF is up 15.42% year-to-date, due in part to a 21.66% weight to Amazon.com Inc. (NASDAQ:AMZN). RTH has one of the largest weights to that stock among all US-listed ETFs. Dow components Home Depot (NYSE: HD) and Walmart Inc. (NYSE: WMT) combine for over 20% of RTH’s roster.

“Credit Suisse’s Seth Sigman notes that, given that the trade war has been dragging on for some time, a number of retailers have already made moves to diversify their supply chains,” according to Barron’s. “Yet the rush to get goods into the U.S. ahead of deadlines has led to port delays and product shortages.”

Earlier this year, the National Retail Federation (NRF) projected retail sales figures to grow from 3.8 to 4.4 percent, which is lower than the 4.6 percent growth experienced in 2018. Whether it hurts the ETFs will depend on how the market interprets the data, but the NRF says the forecast comes “despite threats from an ongoing trade war, the volatile stock market and the effects of the government shutdown.”

“The market’s double-digit year-to-date rally appears to have drawn some strength from that belief; the idea that it’s only a matter of time before a tariff agreement is reached fueled hopes of ongoing economic growth and allayed worries about the sustainability of the long bull market,” according to Barron’s.