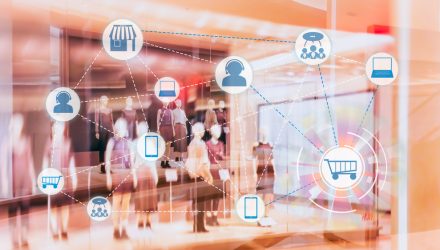 With all the talk about inflation, a slowing economy, and rising interest rates, it’d be reasonable for investors to ponder the fate of retail stocks and the related exchange traded funds.

However, the VanEck Vectors Retail ETF (RTH) is higher by 6.11% over the past month and 17.10% since the start of the third quarter, confirming that there’s still sturdiness among retail stocks. The $171.3 million RTH, which turns 11 years old in December, is home to 25 stocks, featuring an admirable mix of internet and brick and mortar retailers.

In fact, it’s some of the fund’s big box holdings, such as Home Depot (NYSE:HD), Lowe’s (NYSE:LOW), and Walmart (NYSE:WMT), are contributing to RTH’s recent bullishness. Home Depot and Walmart, both members of the Dow Jones Industrial, recently delivered better-than-expected second-quarter results.

“Adding to the good news, Walmart and Home Depot said they would meet or improve upon their full-year financial targets as they cut costs, weed inventories, raise prices, and continue to attract customers. Walmart’s chief executive Doug McMillon told CNBC that its stores were attracting more households with annual incomes of $100,000 or higher,” wrote Morningstar analyst Sandy Ward.

Home Depot and Walmart are RTH’s second- and fourth-largest holdings, respectively, combining for almost 18% of the ETF’s weight. If those companies are delivering encouraging commentary, it’s reasonable to expect that Lowe’s and Target (NYSE:TGT) will follow suit.

Lowe’s and Target combine for 9.57% of RTH’s roster. No conversation about RTH would be complete without addressing Amazon (NASDAQ:AMZN), which is the ETF’s largest holding at a weight of 21.23%.

“We assign a wide economic moat rating to Amazon based on network effects, cost advantages, intangible assets, and switching costs. Amazon has been disrupting the traditional retail industry for more than two decades while also emerging as the leading infrastructure-as-a-service provider via Amazon Web Services,” said Morningstar analyst Dan Romanoff.