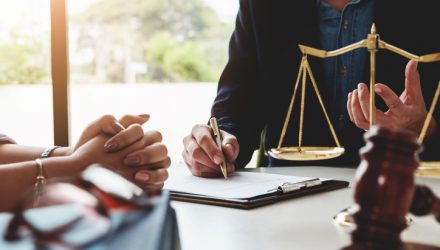 That could present some headline risk for communication services exchange traded funds, including the Communication Services Select Sector SPDR Fund (XLC). However, some analysts view those regulatory concerns as priced into shares of Alphabet and Facebook. The $4.9 billion XLC, the largest communication services ETF, allocates about 40% of its combined weight to those two stocks.

“While Google may have been accused of some anticompetitive behavior, including some bias in search results, in the past–it reached a settlement with the FTC in 2013–we think it has attained its dominant positions mainly through creating and leveraging the network effect moat source that most of its offerings have, which results in significant benefits for consumers, rather than through anticompetitive behavior,” said Morningstar in a recent note.

The communications services sector overall is still a relatively new offering that was formed in late 2018, when 26 companies from the telecommunication services, consumer discretionary and information technology sectors were shuffled to a new Communications Services sector, creating GICS Code 50 – a combination of old media and new media.

“The same can be said of Facebook and its various assets, including Facebook News Feed, Instagram, and WhatsApp. For this reason, we think the competitive advantages of both companies and their ability to generate excess returns on invested capital remain sustainable,” according to Morningstar.

According to most analysts, Alphabet is expected to be the biggest driver of revenue growth, accounting for 8.1% of the total 20.1% expected growth in 2018, which is at least partly due to its two classes of shares, which elevates the revenue growth figures.

“While it is not clear when the investigations will begin and whether any legal action will be taken, we believe it is far too early to begin handicapping the potential impact on either company,” said Morningstar. “In addition, it’s important to remember that Google has faced relatively modest fines (with respect to its total annual revenue and market capitalization) after a decade of investigation in Europe. We believe regulatory risk is now more than priced in to Alphabet stock, which is now trading in 4-star territory. We are maintaining our $1,300 fair value estimate for Alphabet and recommend buying this wide-moat and high-uncertainty name. Facebook stocks remains in 3-star territory, and we recommend a wider margin of safety before considering investment.”