You are at:Home»Beyond Basic Beta Channel»Reasons to Rock With The Russia ETF 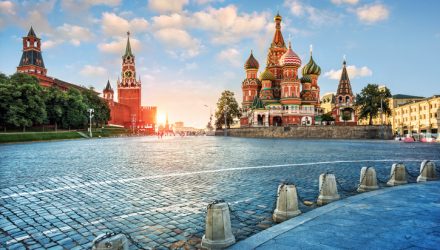 Reasons to Rock With The Russia ETF

The VanEck Vectors Russia ETF (NYSEArca: RSX), the largest Russia ETF trading in the U.S., has been a star among emerging markets funds this year, soaring 32.21%. That’s roughly triple the 10.86% gained by the MSCI Emerging Markets Index.

RSX 2019 showing is all the more impressive when considering oil prices have dithered for much of the year and Russia is one of the world’s largest crude producers. RSX follows the MVIS Russia Index, “which includes publicly traded companies that are incorporated in Russia or that are incorporated outside of Russia but has at least 50% of their revenues/related assets in Russia,” according to VanEck.

Add to that, Russian stocks have been sturdy at a time of rampant concern about the overall health of the economy there.

“Undoubtedly, the Russian economy has been in a difficult situation,” according to Seeking Alpha. “Due to a long list of geopolitical mistakes (though they may not call them that), the country has been under many sanctions. Even more, a sustained drop in the price of oil and a slowing global economy have continued to cause the country’s public companies to struggle.”

Bolstering the case of RSX and taking some of the volatility edge off of owning Russian stocks is the market’s status as a dividend destination. Russia is one of the largest emerging markets dividend payers and RSX yields almost 4%, nearly double the 2.08% found on the MSCI Emerging Markets Index.

Many of RSX’s largest components are state-controlled energy companies that Moscow leans on to boost payouts. Additionally, Russian banks are showing dividend growth potential of their own. The financial services sector accounts for 11.7% of RSX’s weight.

“People tend to buy the fund when its dividend is high and/or after it has been outperforming. We saw outperformance following the 2008 crash that led to large inflows and large inflows in 2015 when it had a very high dividend yield. But, only today do we see both recent outperformance and historically high dividend yield, signaling a fundamental bullish shift in the Russian equity market,” according to Seeking Alpha.

Historically, Russia is inexpensive compared to other developing economies and that remains the case this year.

“As you can see, these valuations are very low with a median P/E of 7.6X and a high dividend yield of 4.6%. Debt ratios are higher for some companies, but they are in more capital intensive industries so it is understandable. Strong 3-year revenue growth and generally high net margins are also a great sign,” notes Seeking Alpha.