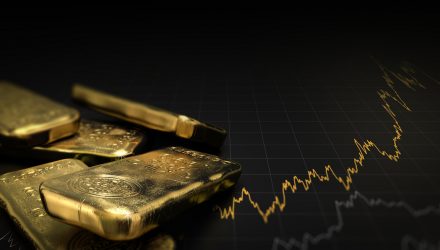 Gold-related ETFs have been gaining ground as risk-off sentiment reignited in response to another round of trade concerns between the U.S. and China.

“The poor seasonal time for gold is over as we move into May and June and…increasing volatility and risk-off sentiment in the wider financial markets should support gold and see it trade back above $1,300 in the near future before challenging $1,400 later in the year,” Mark O’Byrne, research director at GoldCore, told MarketWatch.

The renewed interest for gold may also be supported by the turn in riskier equities with many focused on trade talks. U.S. Trade Representative Robert Lighthizer said that the Trump administration will hike tariffs on $200 billion in Chinese goods on Friday after President Donald Trump first hinted at the potential increase on Chinese goods over the weekend.

As the risk-off sentiment intensifies, investors may look to more safe-haven bets or better stores of wealth, such as physical precious metals.

“Gold and silver markets bulls have been disappointed their safe-haven metals” haven’t seen more demand “amid the heightened geopolitical uncertainty that includes the potential U.S.-China trade war escalation, but also increased U.S.-Iran tensions,” Jim Wyckoff, senior analyst at Kitco.com, said in a daily note. “However, reports say demand from major gold-consuming country India is expected to be significantly higher on the geopolitical tensions, especially as this is the time of stronger seasonal demand for gold.”

The precious metals mining industry has also been on the road to improved efficiency as they cut costs, increase production and raise more money.

In the last quarter of 2018, gold production continued to increase and global average all-in sustaining costs continued to go down, Mining reports.

The trends reveal a very positive indication that overall, gold miners are continuing to monitor costs closely while mining out more gold.

The stabilized Q4 operating income is also partially attributed to the improving market conditions. Investors’ confidence in the gold mining industry, which was at a low in the third quarter, has been improving alongside gold prices since the last months of 2018.