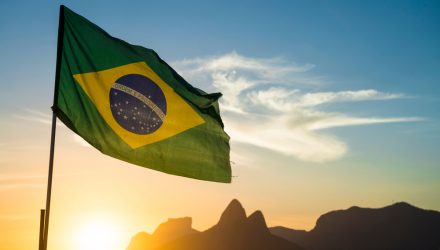 Owing in large part to soaring commodities prices, Brazilian stocks are among the best-performing emerging markets assets this year.

While a year-to-date loss of 1.89% for the large-cap MSCI Brazil Index isn’t anything to brag about, it’s far better than the 18% shed by the broader MSCI Emerging Markets Index. The same trend is playing out with emerging markets small-cap equities.

Take a look at the VanEck Vectors Brazil Small-Cap ETF (BRF), which is outperforming the MSCI Emerging Markets SmallCap Index by about 650 basis points this year. While Brazilian equities are outperforming broader emerging markets strategies this year, investors may want to take a wait-and-see approach with the “wait” involving allowing the country’s national election in October to pass.

“The presidential election slated for October is more fraught than usual: Incumbent Jair Bolsonaro is teasing a Donald Trump–style ‘stop the steal’ campaign if he loses, as polls now indicate he will. Some prominent military men sound sympathetic,” reported Craig Mellow for Barron’s.

Indeed, Brazilian markets have an established reputation of dealing with elevated volatility when national elections roll around. BRF, which is more than 13 years old and tracks the MVIS Brazil Small-Cap Index, may not be immune to those near-term jitters, but the fund could offer tailwinds, particularly if Brazil’s central bank engages in interest rate cutting following the election, which is a possibility.

“Then, there’s the small matter of interest rates. Brazil’s inflation has been in double digits since last autumn. The central bank has chased it with an epic hiking cycle, from 2% to 13.25%. Aside from slamming the brakes on a post-Covid recovery,” according to Barron’s.

Said another way, the central bank there has ample room to lower rates in a bid to boost Latin America’s largest economy. As a small-cap ETF, BRF is tied to that story because small-cap companies are usually more levered to domestic economies than large-cap counterparts.

The combination of lower borrowing costs and an improving economy — assuming those scenarios arrive — would likely be material for BRF investors because the VanEck ETF allocates almost 22% of its roster to consumer discretionary stocks. That’s the fund’s biggest sector exposure.

“Lula actually secured an investment-grade credit rating for Brazil back in the 2000s, and has tapped centrist ex–São Paulo Gov. Geraldo Alckmin as his vice presidential running mate. That’s comforting to some investors,” noted Barron’s.