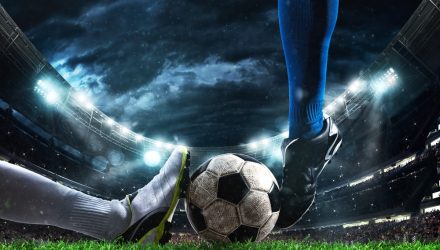 It’s often said in sports that, sometimes, the best offense is a great defense. That advice is also meaningful in the world of investing.

The strategy is relevant at a time of broader market weakness. As of April 22, MOAT is outperforming the S&P 500 by about 360 basis points year-to-date. Wide moat stocks outperforming isn’t uncommon.

“When used carefully, the wide-moat designation has led to unusually high returns. Morningstar’s Wide Moat Focus Index holds a small number of wide-moat stocks, chosen because they also have low prices,” writes Morningstar John Rekenthaler. “Since October 2002, when the moat classifications debuted, that benchmark has soundly outgained the S&P 500. A wide moat plus a cheap valuation is an attractive combination!”

This year, MOAT’s defensive properties are on display, showing that a combined 29% allocation to healthcare and consumer staples stocks is benefiting investors. There are other reasons that MOAT’s underlying index matters, namely the fact that not all wide moat approaches outperform broader equity benchmarks.

“However, among the three broad moat groupings that capture the entire available universe, rather than a hand-picked subset, the wide category has posted lower returns than its competitors. In hindsight, this is not surprising. Because their businesses are strong, wide-moat firms tend to be popular, and therefore relatively expensive,” adds Rekenthaler.

“But it is not in the nature of wide-moat firms to surprise. By and large, they deliver on what they promise. Thus, the very reliability that makes such firms appealing also dampens their gains,” concludes Rekenthaler. “It is harder for wide-moat businesses to alter the marketplace’s opinion than it is for companies that are less well-regarded.”

The $7.1 billion MOAT holds 52 stocks, none of which exceed a weight of 2.9%. Over the past three years, MOAT’s largest drawdown has been slightly below that of the S&P 500. MOAT, which turned 10 years old on April 24, allocates 26.3% of its weight to technology stocks.