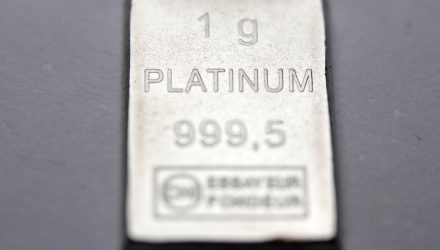 The Aberdeen Standard Platinum Shares ETF (NYSEArca: PPLT) is up 7.11% year-to-date and robust demand is seen as one of the factors boosting platinum this year.

Investors’ appetite for platinum via ETFs offset declines in demand for the white metal in other key markets.

Pursuing Platinum as an Investment

However, with respect to the other precious metals, platinum presents a value proposition for seasoned investors and beginning investors looking to shore up their portfolios with commodities.

Historically, platinum prices have exhibited a strong correlation the South African rand currency – as the ZAR appreciates, the higher costs of production and lower U.S.-dollar-denominated platinum prices would put pressure on miners, causing slowdowns in production.

“As per the WPIC’s report, the majority of the ETF growth came from South Africa, where investors added 418,000 ounces to their holdings,” according to Investing News. “The UK had the second largest increase in ETF holdings, as the European country produced 178,000 ounces during Q1. Meanwhile, the US and Switzerland increased their access to platinum investing via ETFs by 79,000 ounces and 18,000 ounces, respectively.”