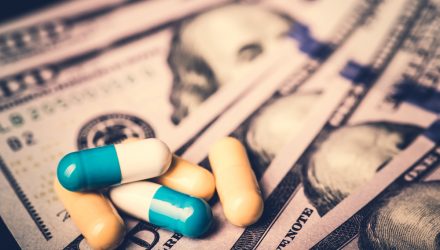 This is a mid-term election year, meaning that some familiar issues investors should be aware of are popping up yet again. That includes reducing pharmaceutical prices.

Market participants may view the reappearance of the drug price debate as ill-timed on the basis that the healthcare sector is struggling this year, but some analysts believe that blue-chip pharmaceuticals companies, including components of the VanEck Vectors Pharmaceutical ETF (PPH), can handle the specter of lower drug prices.

That’s potentially good news because PPH, which tracks the MVIS US Listed Pharmaceutical 25 Index, is home to plenty of stocks that could be vulnerable to negative market reactions to lower drug prices. To its credit, PPH has been mostly sturdy following Senate Democrats recently unveiling a plan that, if signed into law, would allow Medicare to negotiate reduced pharmaceuticals prices.

Under the terms of the proposal, the Department of Health and Human Services (HHS) would be able to, starting in 2026, select 10 drugs from the top 50 in Medicare parts B and D on which to lower prices. Another 20 drugs could be added three years later.

“The discount is based on how long the drug has been on the market. For drugs marketed more than nine years, a minimum 25% discount is required; greater than 12 years, 35%; and greater than 16 years, 60%,” according to Seeking Alpha.

Obviously, this is a relevant development to PPH’s 26 components, which include Eli Lilly (NYSE:LLY), Dow components Merck (NYSE:MRK) and Johnson & Johnson (NYSE:JNJ), Pfizer (NYSE:PFE), and Bristol-Meyers Squibb (NYSE:BMY), among others.

Drugs produced by those companies and other PPH member firms are among the most prescribed to Medicare recipients, confirming that investors considering PPH should stay abreast of these negotiations. However, recent developments don’t necessarily mean PPH holdings are in for downside. As noted above, the Senate proposal pertains to Medicare recipients — not the entire audience to which pharmaceuticals are prescribed.

Additionally, with the mid-term elections right around the corner, near-term action on the aforementioned legislation may not occur. Some analysts say that PPH member firms have avenues to deal with the Senate proposal.

“Our analysis indicates that companies are already beginning to accelerate their rate of price increases, perhaps in part due to inflationary factors but potentially also due to anticipation of the legislation and its possible long-term impact,” according to RBC analysts.