You are at:Home»Beyond Basic Beta Channel»Overlooked Malaysia ETF Could Perk Up 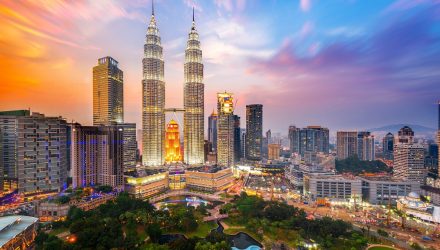 Overlooked Malaysia ETF Could Perk Up

Compared to some other single-country emerging markets exchange traded funds (ETFs), the iShares MSCI Malaysia ETF (NYSEArca: EWM) often goes overlooked. This year, that might be a good thing because at a time when broader emerging markets benchmarks are rallying, EWM is trading slightly lower on a year-to-date basis.

Some market observers believe EWM, which is down 0.17% this year, is poised to join the emerging markets rally.

“Malaysian equities, the world’s worst major market this year, might be close to a turnaround on the back of the government’s increasing support, according to Macquarie Group Ltd.,” reports Bloomberg.

Having debuted in March 1996 when Malaysia was a larger percentage of the MSCI Emerging Markets Index than it is today, the $536.14 million EWM is one of the oldest single-country emerging markets ETFs. The fund tracks the MSCI Malaysia Index and holds 45 stocks.

As is the case with many emerging markets, government reforms in Malaysia are expected to bolster the country’s economy and equity markets.

“Reforms at state-linked companies, more political clarity and stimulus could see the benchmark FTSE Bursa Malaysia KLCI Index surge to 1,800 in the base scenario, or even reach 1,900 in the bullish case, Macquarie analysts wrote in the April 26 note. That implies a 10 to 16 percent return from Friday’s close,” according to Bloomberg.

Compared to some other single-country emerging markets funds, EWM is often among the least volatile as highlighted by a three-year standard deviation of 12.77%. The ETF allocates 33.73% of its weight to the financial services sector and over a quarter of its combined weight to the consumer staples and utilities sectors.

“Malaysian stocks have bucked the global rally this year, losing more than 3 percent in 2019 while the MSCI Asia Pacific Index gained 11 percent. An economic growth slowdown and uncertainty over the new administration’s policies led to $4.4 billion of equity outflows in the past 12 months,” reports Bloomberg.

For more information on Asian markets, visit our Asia category.