You are at:Home»Beyond Basic Beta Channel»Opportunity Still Abounds With These Oil ETFs 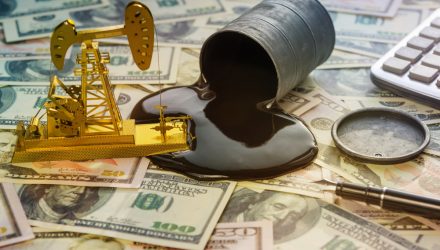 The S&P 500 Energy Index is up almost 60% year-to-date, easily making energy the best-performing sector, but even with those factors in mind, some analysts believe the group can continue its bullish ways.

Among the energy segments some market observers are constructive on are oil services, and that could spell good news for exchange traded funds like the VanEck Vectors Oil Services ETF (NYSEArca: OIH). As it is, OIH is no slouch in 2022, surging 57.41%.

“One of the sectors where suppliers have more power now is oil services. For the past few years, the big service players like Schlumberger (SLB) and Halliburton (HAL) have had to cut expenses as producers have cut expansion plans. As some producers expand again, they’ve found there aren’t as many crews or as much equipment available, and they’re been writing bigger checks,” reported Avi Salzman for Barron’s.

Schlumberger and Halliburton are the dominant oilfield services providers, and as such, they combine for almost 35% of OIH’s weight. However, Barron’s mentioned Liberty Energy (NYSE:LBRT) — a smaller OIH holding — as an oil services name that could potentially reward investors.

“Liberty bought Schlumberger’s hydraulic fracturing, or fracking, business in 2020, with Schlumberger taking an equity stake in Liberty. Liberty now has substantial scale and the ability to raise prices as producers prepare to expand,” according to Barron’s.

On the other hand, some refining equities are worth considering. Despite soaring crude prices — oil is a major input cost for refiners — the VanEck Vectors Oil Refiners ETF (CRAK) is up 26.55% year-to-date. Refiners, including CRAK components, are benefiting from scarcity. Twenty refineries across the U.S. were shuttered over the past decade.

Leggate is bullish on Valero Energy (NYSE:VLO) and PBF Energy (NYSE:PBF), which combine for almost 11% of CRAK’s roster. Phillips 66 (NYSE:PSX) also garnered some adulation in the Barron’s piece. That stock is CRAK’s fourth-largest component at a weight of 7.45%.

“Another refiner worth considering is Phillips 66 (PSX), which has trailed its peers, in part because it’s more diversified. Phillips has refineries in the Northeast—a particularly supply-constrained region—and has the largest dividend yield of the big refiners, 3.6%,” according to the article.