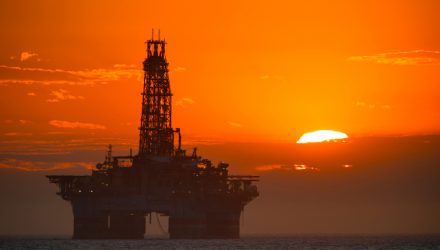 Oil services sector-related exchange traded funds were the hardest hit area of the market Wednesday after the Energy Information Administration revealed a second consecutive week of inventory builds and disappointing economic data out of China and Germany.

Crude oil prices and the energy sector tanked Wednesday, erasing gains in the previous session after the U.S. moved to delay tariffs on Chinese goods.

Adding to the risk-off sentiment, China revealed weak data for July, along with a substantial drop in industrial output growth to a more than 17-year low, which fueled concerns of a broadening economic slowdown in the wake of a prolonged U.S.-China trade war, CNBC reports.

Additionally, a decline in exports also weighed on Germany, sending Europe’s largest economy toward a recession. The broader Eurozone also barely expanded in the second quarter of 2019.

“The data out of China, the potential recession brewing in Germany, all of that is playing into global demand worries,” Phil Flynn, an analyst at Price Futures Group, told CNBC. “Today, we’re back in fear mode.”

Meanwhile, on the supply side, the EIA revealed U.S. crude oil stockpiles grew by 1.6 million barrels last week, compared to expectations of a 2.8 million barrel decline as refineries cut output. The inventory levels were at 440.5 million barrels, or about 3% above the five-year average for tis period of the year.

“Countering this bearish build has been draws to both gasoline and distillates amid strong implied demand,” Matt Smith, director of commodity research at ClipperData, told CNBC.

Nevertheless, some were hopeful that oil cartel OPEC could step in to support prices if crude continues to decline.

“We do expect Brent to continue recovering to $65 per barrel in the coming months,” Commerzbank analyst Carsten Fritsch said. “Oil demand in China and the United States is unlikely to weaken noticeably as a result of the trade conflict, though if this were to happen, Saudi Arabia would further reduce its output.”