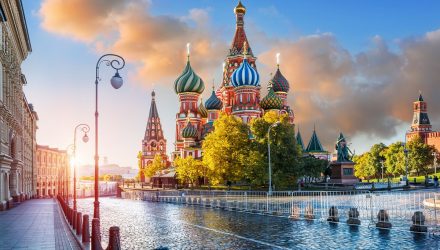 With oil coming off one of its best first-quarter showings on record and continuing to ascend early in the second quarter, it is not surprising that Russian stocks and the related exchange traded funds (ETFs) are getting in on that act.

The VanEck Vectors Russia ETF (NYSEArca: RSX), the largest Russia ETF trading in the U.S., is higher by more than 14% this year. Russia is one of the world’s largest oil producers, though it is not a member of the Organization of Petroleum Exporting Countries (OPEC).

“One of the key Russian officials to foster a supply pact with OPEC, Kirill Dmitriev, signalled on Monday Russia wants to raise oil output when it meets with OPEC in June because of improving market conditions and falling stockpiles,” reports The Moscow Times.

RSX, which turns 12 years old later this month, reflects the commodities intensive nature of the Russian economy. The fund devotes 41% of its weight to the energy sector and almost 23% to materials stocks.

“Dmitriev, head of the Russian state’s direct investment fund, was the first Russian official to predict a deal with OPEC in 2016 and since then has become a key defender of the pact despite pressure from domestic oil firms to drop the agreement,” according to The Moscow Times.

However, Dmitriev has come under scrutiny by executives at some Russian oil majors that want to pump more crude to take advantage of higher prices.

“Dmitriev and energy minister Alexander Novak have come under increased pressure over the past year from firms such as Rosneft, whose boss Igor Sechin, a close ally of President Vladimir Putin, has said Russia should abandon output cuts,” reports The Moscow Times.

For more news on Russia, visit our Russia category.