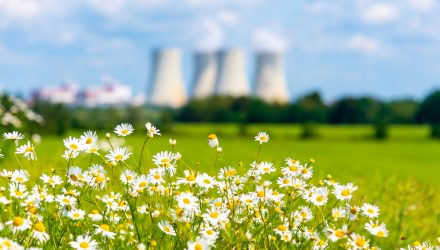 Energy is again the best-performing sector in the S&P 500 this year, but that doesn’t mean all the good vibes are confined to oil and gas stocks and the related exchange traded funds.

Nuclear energy is getting its day in the spotlight again, and that probably won’t be transitory. Once viewed as controversial in a bygone era of energy policy debate, nuclear is back in style in a big way for a simple reasons: It’s one of the cleanest, perhaps most dependable form of renewable energy.

For investors, there are tangible benefits. Consider the case of the VanEck Uranium+Nuclear Energy ETF (NLR). NLR is higher by almost 0.66% year-to-date. That might not sound like much, but it’s far better than the S&P 500, which is in a bear market.

Importantly, NLR’s strong relative showing this year may not be a one-off event because, in the U.S., there’s more political support for nuclear than many investors may realize.

“Congress has passed a series of bills over the past four years supporting the development and deployment of ‘advanced’ nuclear reactor designs, which are markedly different from those currently in commercial operation. Energized by billions of dollars in funding through the Department of Energy, a sprawl of experimental efforts and technology demonstration projects are now underway,” according to the American Institute of Physics.

NLR, which tracks the MVIS Global Uranium & Nuclear Energy Index, turned 15 years old last month and is home to 25 stocks. That’s not a huge lineup, but NLR’s underlying benchmark has the flexibility to tap into several nuclear industry groups, showing that the fund is more diverse than its roster size indicates.

Adding to the long-term allure of NLR is the point that there’s actually bipartisan support for nuclear power on Capitol Hill — a rarity in this political climate. Energy Secretary Jennifer Granholm previously voiced support for nuclear, saying it’s essential that it be part of a broader renewable energy agenda.

“Aside from funding reactor projects directly, Congress is supporting activities such as early-stage R&D, reactor licensing reforms, development of specialized uranium fuel supplies, and assistance to communities hosting fossil fuel plants that will transition to advanced nuclear power. Like the similarly multi-pronged effort to bolster the U.S. semiconductor industry through the CHIPS and Science Act, these policies have benefited from bipartisan backing, though they have had a smaller public profile,” noted the American Institute of Physics.