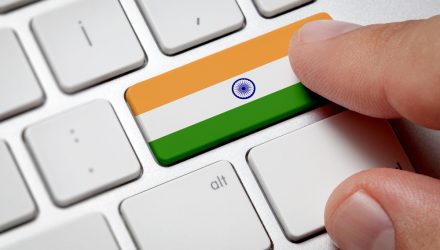 India is an ascending digital player in the emerging markets universe, but unlike China, there aren’t many exchange traded funds dedicated to India’s internet rise.

The VanEck Digital India ETF (DGIN) changed that last week. DGIN, which tracks the MVIS Digital India Index, comes to market as Asia’s third-largest economy is increasing its digitization and becoming a larger player on the emerging markets e-commerce stage.

Those are potentially attractive traits for long-term investors because not only is India Asia’s third-largest economy, it’s home to 1.4 billion people, making it one of the largest countries in the world by population.

“Digitization is important to India because of the transformation it has brought and will continue to bring to the economy,” says Nicolas Fonseca, VanEck associate portfolio manager. “Virtually everything in India used to be manual—cash transactions, paper documents, etc.—which is generally less efficient compared to digitized forms. New digital ecosystems are already visible and are reshaping consumer-producer interactions in agriculture, healthcare, retail, logistics, among other sectors.”

India has long had one of the most expansive, vibrant technology sectors among developing economies, but many of the legacy ETFs in the India category do either an average or a subpar job of capturing that theme. Conversely, DGIN dives right into India tech opportunities with a 62.1% weight to that sector, according to issuer data.

Access to India’s tech story is something for investors to consider because many people in that country are already tech-savvy, but there’s significant room for growth on this front, which is bolstered by India’s favorable demographics.

“India is expected to add an estimated 140 million middle-income and 21 million high-income households by 2030, with a vast majority already owning a mobile phone,” adds Fonseca. “Its people will drive growth and innovation, which could lead to an increase in market cap from $3.5T to over $5T in the coming years, making it the fifth largest market by capitalization.”

Adding to the DGIN opportunity set is the fact that today, less than half of India’s population has internet access — a penetration rate that’s low compared to large developed markets like the U.S. However, digitization is about much more than the internet, and DGIN addresses that concept with stringent requirements for admission.

“Companies involved in the digitization includes those with at least 50% of their revenues coming from software, hardware, IT services and consulting, communications equipment, telecommunications infrastructure, internet applications, e-commerce including online financial services, or electronic payment processing,” concludes Fonseca.