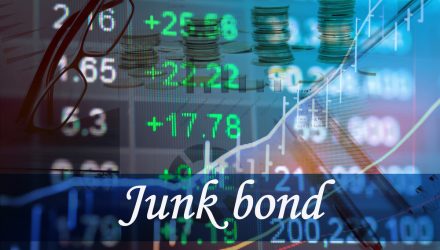 After recently moving to prop up the investment-grade corporate bond market, the Federal Reserve is setting its sights on junk bonds. More specifically, fallen angels, or those bonds that were born as investment-grade issuers only to later be downgraded to junk territory.

That could be a boon for ETFs such as the VanEck Vectors Fallen Angel High Yield Bond ETF (NASDAQ: ANGL), the dominant name among ETFs in this category.

ANGL seeks to replicate as closely as possible the price and yield performance of the ICE BofAML US Fallen Angel High Yield Index. The index is comprised of below investment grade corporate bonds denominated in U.S. dollars that were rated investment grade at the time of issuance.

“As part of an effort to make available $2.3 trillion in new loans amid the coronavirus crisis, the central bank said Thursday that it would buy the bonds of ‘fallen angel’ companies or companies that get downgraded from investment grade to junk,” reports Alexandra Scaggs for Barron’s. “Companies will qualify if they had an investment-grade rating on March 22 and have since been downgraded to one of the top three tiers of the high-yield bond market (BB+, BB or BB-).”

ANGL was the first ETF to provide exposure to “fallen angel” bonds, speculative-grade debt securities that were initially issued with an investment-grade rating but were later downgraded to junk territory. Fallen angel issuers tend to be larger and more established than many other junk bond issuers.

Since these fallen angels were formerly on the cusp of investment-grade status, the group of junk bonds typically has a higher average credit quality than many other speculative-grade debt-related funds. The higher average quality also helped absorb some of the market volatility we experienced last year.

The fallen angel ETF tracks so-called fallen angel speculative-grade rated debt or debt securities that were initially issued with an investment-grade rating but were later downgraded to junk territory. Fallen angel issuers tend to be larger and more established than many other junk bond issuers.

Data indicate the Fed is stepping into a market that could be awash in fallen angels.

“About 47% of the investment-grade bond index is made up of companies rated three levels above junk or less. Bank of America says that around $200 billion of bonds could be downgraded from investment grade to high yield across the downturn cycle. Citigroup says that $200 billion to $300 billion could get downgraded just this year, at least doubling the prior single-year record from 2002,” according to Barron’s.