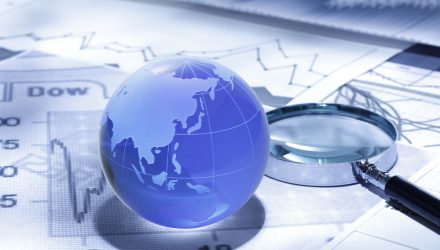 International equities — from both developed and emerging markets — have long traded at valuation discounts relative to domestic peers. That’s not fresh news.

What’s more relevant to investors is that a broad swath of ex-U.S. stocks aren’t just attractively valued; many possess quality benefits, including wide moat traits. On that note, the VanEck Vectors Morningstar International Moat ETF (MOTI) is an exchange traded fund worth considering by investors looking to add international diversification to their portfolios.

MOTI is the international counterpart to the famed VanEck Vectors Morningstar Wide Moat ETF (CBOE: MOAT), which is itself home to a fair number of attractively valued stocks.

“The U.S. market now trades at about a 15% discount, according to Morningstar analysts, as overvalued stocks drop and stocks already trading at a bargain fall further into discount territory. As of July 19, the number stocks considered undervalued rose to 514, up from 289 at the end of the first quarter, an almost 78% increase,” wrote Morningstar analyst Jakir Hossain.

For its part, MOTI, which tracks the Morningstar Global ex-US Moat Focus Index, is home to 77 stocks. Several of those names reside on Morningstar’s list of newly undervalued five-star names. That includes Spanish-language media giant Grupo Televisa, which has a dominant footprint in Mexico — Latin America’s second-largest economy.

“We remain bullish on Televisa’s long-term prospects. Historically a powerhouse in Spanish-language media because of its programming prowess and ownership of the leading broadcast networks in Mexico, the firm merged its media business into Univision,” said Morningstar analyst Neil Macker.

Dutch banking behemoth ING Groep is another example of a MOTI holding with a compelling valuation proposition — one that could be in place because investors are overstating the impact of low interest rates in Europe.

“We believe ING’s strong deposit franchises in its core markets is its greatest competitive advantage. This is completely obscured in the current low interest-rate environment. In our opinion ING has surplus capital, which could boost shareholder returns and a more focused geographical strategy could drive a rerating,” noted Morningstar equity analyst Niklas Kammer.

MOTI features exposure to stocks from 20 countries, and China accounts for 21.07% of the fund’s geographic exposure. However, the bulk of the fund is directed to ex-U.S. developed markets, including the U.K., Japan, and Germany, among others. Confirming the value of wide moat investing, MOTI is beating the MSCI ACWI ex USA Index by 900 basis points year-to-date.