You are at:Home»Beyond Basic Beta Channel»Mexico ETF Waits For The Real AMLO to Stand Up 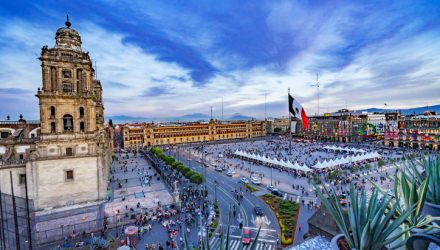 Mexico ETF Waits For The Real AMLO to Stand Up

The iShares MSCI Mexico Capped ETF (NYSEArca: EWW), the largest US-listed ETF dedicated to Mexican equities, is up just 4.42% this year, less than half the returns offered by the MSCI Emerging Markets Index and political volatility is one reason why Mexican stocks are lagging.

Political unrest ensued in Mexico as the unexpected resignation of Mexico’s Minister of Finance Carlos Urzúa had its toll on Mexican assets following the news. Mexico President Andrés Manuel Lopez Obrador (AMLO) cited disagreements over “development plans for Mexico” as the reason.

While AMLO was hailed as a champion of the people and wasn’t seen as a major threat to Mexico’s financial markets, global investors remain divided over his ability to steer Latin America’s second-largest economy.

“Mexico bulls hope for a repeat of his tenure as mayor of Mexico City when he tempered leftist rhetoric with tight purse strings and a pragmatic stance toward business,” reports Craig Mellow for Barron’s.

Earlier this year, President Trump took to Twitter to say that if Mexico agreed to up purchases of agriculture commodities from U.S. farmers, the tariffs could be averted. Trump originally floated the idea of tariffs on Mexico if the country did not step up to help with the immigration crisis.