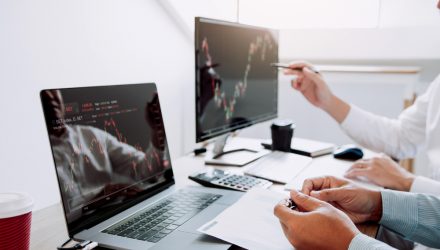 As 2022 market performance confirms, not much is working, but as the VanEck Vectors Morningstar Wide Moat ETF (CBOE: MOAT) proves, wide moat stocks are performing less poorly than the broader market.

The benefits of wide moat investing aren’t confined to U.S. borders. Investors looking to add some international diversification to their portfolios at attractive valuations while harnessing the perks of wide moats may want to evaluate the VanEck Vectors Morningstar International Moat ETF (MOTI).

“The Morningstar® Global ex-US Moat Focus IndexSM (the “International Moat Index”) finished May ahead of the MSCI All Country World Index ex USA (the “ACWI ex USA”) by more than 8% in 2022 (-2.57% vs. -10.74%, respectively),” wrote Brandon Rakszawski, VanEck senior product manager.

MOTI turns seven years old next month. Like its US counterpart, MOTI looks to identify attractively valued wide moat stocks. While MOTI isn’t a dedicated value fund in the strictest sense of the term, its value stance increased in recent years. That’s not necessarily surprising when considering international markets have long offered more value than the U.S.

MOTI holds 75 stocks from 20 countries and the fund’s geographic lineup is a mixture of developed and emerging markets, though it heavily favors the former. China, the U.K., and France combine for approximately 45% of MOTI’s geographic exposure and it’s not a stretch to say those markets are less expensive than the U.S.

MOTI’s value proposition is also apparent at the sector level as the fund devotes about half its weight to financial services, consumer discretionary, and communication services stocks. Communication services stocks in many international markets aren’t as richly valued as their U.S. counterparts and are more defensive. Add it all up and while MOTI isn’t infallible, it could be a decent idea for investors seeking international exposure.

“The International Moat Index’s exposure to moat-rated companies with attractive valuations has positioned it well for the global market turmoil of 2022 and the market’s rotation away from growth to cyclical value-oriented businesses,” concluded Rakszawski.