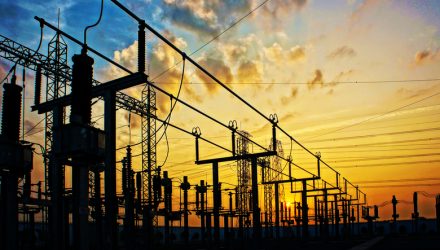 The Utilities Select Sector SPDR (NYSEArca: XLU), the largest utilities sector ETF, and rival utilities ETFs are often embraced by income investors due to above-average yields. Indeed, XLU currently has a dividend yield of 3.07%, which is well above what investors will find on 10-year Treasuries or the S&P 500.

While XLU’s dividend yield is certainly attractive in a world of low yields, its yield is below the 3.35% offered by the Energy Select Sector SPDR (NYSEArca: XLE), the largest equity-based energy ETF. XLE sporting a higher yield than XLU has happened before, four years ago to be exact, but it doesn’t happen often.

“This isn’t the first time the oil-heavy S&P 500 Energy index has offered a higher dividend yield than utilities (that was in August 2015),” reports Bloomberg. “But we’ve now had almost four months of this situation, by far the longest run, and the spread has widened. After almost three decades of utilities offering roughly 1 to 3 percentage points of extra yield compared to their oilier energy brethren, the script seems to have flipped.”

The utilities sector is one of this year’s best-performing groups, underscoring the notion that many investors will embrace utilities stocks and ETFs during favorable interest rate environments. The Federal Reserve recently obliged by lowering interest and another rate cut is possible before the end of this year.

At a time when some sectors are being slammed due to the re-emergence of trade tensions between the U.S. and China, utilities stocks hold some allure for investors because the sector generates nearly all of its revenue on a domestic basis. S&P 500 utilities companies, on average, depend on the U.S. for 95% of their revenue. Conversely, many XLE components are export-heavy companies.

“Utilities, meanwhile, continue to enjoy reasonably steady earnings growth,” according to Bloomberg. “While U.S. electricity demand has flatlined, demand doesn’t drive earnings for regulated utilities; investment in old grids (including for natural gas) does, and that has kept on going. In other words, a utility with ever-expanding capital expenditures rewards investors regardless of demand for electrons. The same cannot be said for oil and gas spending”

Related: Energy ETFs Could be Ready to Turn For The Better

Slowing demand and the emergence of alternative energy are among the factors weighing on traditional energy firms, meaning they need to compel investors to stick with their stocks with higher dividends.

“The upshot is that money has moved into utilities, attracted by the dividends, yes, but also the promise of growth,” reports Bloomberg. “With their own growth narrative having ebbed, oil and gas producers must pay investors to hold their stocks.”