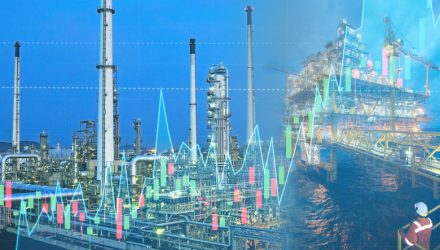 Oil’s demise has been the result of a number of occurrences. On Tuesday, the API reported a surprise crude oil inventory build of nearly 4 million barrels, jolting markets that had just seen massive increases on earlier news that the United States was pushing back tariffs for some of the items anticipated to go into effect at the beginning of September.

Amid volatility in the oil patch, options traders are implementing some interesting strategies with USO.

Looking ahead, fundamentals are improving. The International Energy Agency projects consumption to increase each quarter of 2019 year-over-year, albeit at a slower-than-usual pace for the first quarter. Meanwhile, on the supply side, Saudi Arabia and other members of the Organization of Petroleum Exporting Countries have been cutting output. Additionally, U.S. sanctions on Iran and Venezuela have reduced further bets on international supplies. However, slowing economic growth would likely restrain oil demand heading into 2020.

Related: Explaining Why It’s So Troublingly Slick In The Oil Sector

USO needs to notch some more movement to make the aforementioned options trade profitable. Currently, the fund resides 28% below its 52-week high and almost 27% above its 52-week low.

“Looking at the charts, the oil fund will need to break out of its recent trading range — and head for new 2019 highs or lows — in order for the straddle to profit. Since gapping lower in mid-May, USO has bounced around between support in the $10.50 region and resistance at $12.60,” said Schaeffer’s.