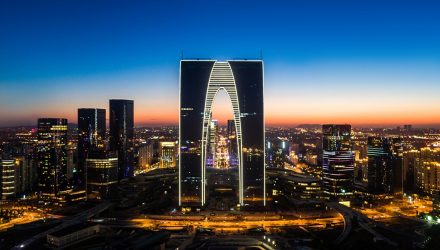 Some of that lag could be attributable to the country’s recent election, which saw President Joko Widodo easily win re-election. Investors may have departed Indonesian stocks in advance of the election to prepare for potential electoral surprises. With Widodo’s win, it is safe to say major surprises did not materialize.

What’s Next for Indonesia?

Indonesia, Southeast Asia’s largest economy, has ample economic opportunity in front of it, but Widodo’s policies need to work to seize that opportunity.

“But to grab that chance, and fulfill his pledge to lift economic growth from 5% to 7% annually, Jokowi will have to loosen restrictive labor laws and link minimum wages to productivity, says Sriyan Pietersz, a regional investment strategist at Matthews International Capital Management,” reports Craig Mellow for Barron’s.

“The state and state-supported monopolies also need significant pruning in Indonesia. The dirigiste tendency keeps out foreign investment and limits the scope of the stock market. The index is dominated by four banks, three of which remain government owned, and the state-controlled telecom,” according to Barron’s.

IDX allocates nearly 32% of its weight to financial services stocks, by far the ETF’s largest sector weight. Consumer staples and materials names combine for almost 28% of the fund’s weight.

“Jokowi has much bigger ambitions, vowing to catapult Indonesia to become world’s fourth-biggest economy over the next 15 years, from No. 16 now. That looks like an uphill climb,” reports Barron’s.