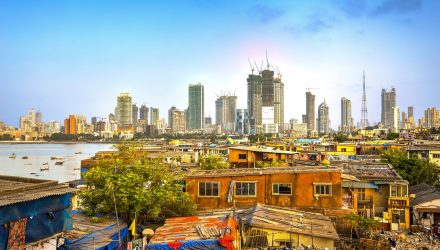 India exchange traded funds trading in the U.S. rallied Monday as exit polls in Asia’s third-largest economy show Prime Minister Narendra Modi with a commanding in the recently held national elections there. Indian election results are out on Thursday.

Shares of the iShares MSCI India ETF (CBOE: INDA) closed at $35.13 on Tuesday – up from $33.70 on Friday. INDA tracks the MSCI India Index, one of the most widely followed gauges of Indian stocks.

“The ruling coalition led by Modi’s Hindu nationalist Bharatiya Janata Party (BJP) is likely to win an even bigger majority in parliament than the massive mandate it got five years ago, exit polls showed after the country’s massive election ended on Sunday, cheering his conservative base,” according to Reuters.

Monday’s surge helped the $4.82 billion INDA reclaim some of its key moving averages, including its 200-day line.

“The ETF took a hit earlier this month amid concerns about global trade, and briefly breached its 200-day moving average,” according to Schaeffer’s Investment Research. “This trendline acted as a formidable ceiling for INDA shares from late 2018 into early March. However, the fund is now back above this trendline, and has trimmed its month-to-date loss to under 1%.”

“At last check, INDA has seen more than 7,700 put options change hands — nine times the average intraday volume, and more than triple the ETF’s average daily put activity,” according to Schaeffer’s. “For comparison, just under 1,900 INDA calls have traded so far today, in line with the norm.”

Nevertheless, India’s markets have been strengthening this year, with foreigners funneling over $7.5 billion into Indian equities on expectations that interest rate cuts and the prospective re-election of Prime Minister Narendra Modi’s government will support earnings growth. The final votes will be tallied on May 23.

“Digging deeper, most of the action has transpired at the June 34 put, which assumed front-month status after last Friday’s close,” notes Schaeffer’s. “More than 4,400 contracts have crossed the tape at this strike today, though most traded closer to the bid price, pointing to seller-driven volume. For those selling to open the June 34 put, they expect INDA shares to remain north of $34 through the close on Friday, June 21, when the options expire.”