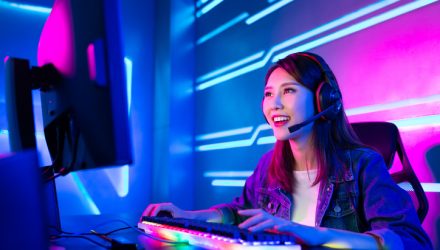 How a New Advertiser Speaks to Rapid eSports Market Growth

Esports investments, including ETFs such as the  VanEck Vectors Video Gaming and eSports ETF (NASDAQ: ESPO), are flourishing in 2019 and expected growth of the industry’s television and online viewing audiences is a big reason why.

“Still, the growth that media organizations have witnessed in the past half-decade has been immensely impressive.,” Jens Fischer noted. “In 2018, Newzoo predicted that, by 2021, esports will become a bigger industry than traditional professional athletics, and the industry will see its first $100 million media-rights deal (an incredibly ambitious forecast). In a follow-up piece published in early 2019, it predicts an audience of 645 million viewers by 2022.”

Advertisers are definitely getting hip to the potential of the e-sports market. That includes big-name advertisers like the U.S. Navy.

“The U.S. Navy has decided to issue a course correction and will see its advertising budget be redirected towards esports and YouTube, while going away from traditional television,” reports Esports Observer. “A report from USNI News states that the maritime branch of the armed forces will spend 97% of its advertising budget on online advertising. The other 3% will be spent on billboards and radio advertisements.”

ESPO will take aim at in industry that is already garnering more interest than traditional sporting events like the MLB and NHL. The growth trajectory of the esports industry is impressive with teams raising funding from venture capitalists and TV ratings for esports events soaring.

Related: A Gaming ETF to Capitalize on Growing Sports Bets

Bolstering the case for ESPO is the dual utility of esports for the Pentagon.

“Esports will be a primary focus of the Navy in 2020, not only for recruitment but morale as well. February will see this new strategy put into place as it begins to advertise in esports,” according to Esports Observer. “Additionally, the Navy will look to become a major sponsor of esports events and field an esports team recruited from the service’s active-duty recruiters. Where and in what esports the Navy plans to advertise was not disclosed at the time of writing.”