China’s latest activity indicators suggest that the economy might still need extra help. Easing, however, is not an option in many other EMs, despite growth concerns.

China’s domestic activity indicators were better than expected in August, but (a) annual improvements were modest (see chart below), and (b) they reflected a low base effect. Even though industrial production posted positive sequential growth (0.32%), it was in the lower half of the multi-year seasonal range. Retail sales actually contracted a bit more in sequential terms (-0.05%), which is below the multi–year seasonal range. The on–going surge in infrastructure investments gave a small boost to overall fixed assets investments, but real estate investments continued to contract, weighing on sentiment. Global slowdown and the zero–COVID policy pose major growth headwinds going forward, so the issue of additional policy support/easing is not going to fade any time soon.

The market might be pricing in policy easing in other parts of emerging markets (EM) at some point in 2023, but for many countries easing is not yet an option. Hungary just made a big adjustment in the reserve requirements for banks, raising them from 1% to at least 5%. Argentina might not be a shining example of policy orthodoxy, but the central bank went for another large (550bps) rate hike yesterday, after inflation surprised to the upside in August. The move comes on the heels of the summer’s 800bps+950bps rate hike “double punch”, and it is set to bring the effective policy rate above 100% (!). Finally, a sizable acceleration in Poland’s core inflation (9.9% year–on–year in August) signals that any talk about rate cuts or even a pause would be very premature at this stage.

The hawkish mood was alive and well in developed markets (DM) this morning, with the Fed Funds Futures fully pricing in a 75bps rate hike next week, with a small probability of a larger 100bps move. The preliminary University of Michigan survey, however, raised some questions about the need for super–aggressive frontloading. The survey components looked very solid (sentiment, current conditions, and expectations), but both short–term and long–term inflation expectations continued to ease (long–term a bit more than projected). Stay tuned!

Chart at a Glance: China – Can Tentative Activity Improvements Last?* 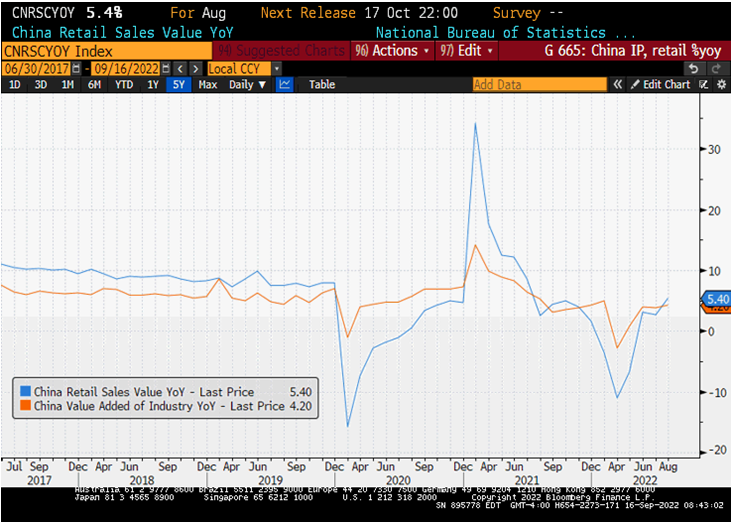 * CNRSCYOY Index: China year-over-year change in retail sales compares the aggregated sales of retail goods and services during a certain month to the same month a year ago.

Originally published by VanEck on September 16, 2022.