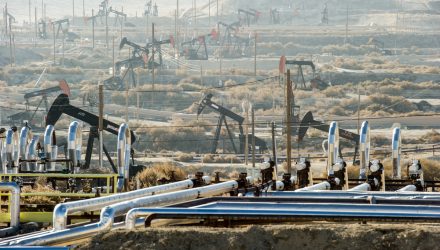 FRAK, which is up over 40% YTD, seeks to replicate as closely as possible, before fees and expenses, the price and yield performance of the MVIS Global Unconventional Oil and Gas Index, which is intended to track the overall performance of companies involved in the exploration, development, extraction, and/or production of unconventional oil and natural gas.

It’s doing this despite several headwinds, such as California’s move to ban fracking. According to a San Francisco Chronicle report, a bill “before the state Legislature seeks to ban the controversial practice of hydraulic fracturing, commonly known as fracking, in response to a high-profile request by Gov. Gavin Newsom, who last year urged lawmakers to move to halt the fossil fuel extraction technique.”

FRAK was down just under a percent the last 5 days despite this potential threat. The fund is also up over 100% the past year, fueled by an energy rally that is seeing oil prices climb.

“Yes, this will impact a significant percentage of oil extraction in California,” said state Sen. Scott Wiener, D-San Francisco, one of the authors of SB467. “In the end, we do need to phase out oil production — not just in California. We need to move to a 100% clean economy. … We’re in a climate crisis.”

“Bitcoin is often slammed over its high electricity consumption,” a News BTC article said. “Critics argue this is wasteful and unsustainable in the long term. However, in an unusual twist to the environmental debate, it turns out that fracking companies are utilizing waste gas to power Bitcoin mining rigs.”

Sergii Gerasymovych, the Founder of EZ Blockchain, found a way to utilize the fracking industry in a way that benefits Bitcoin. This, in turn, could help add a new or supplanting revenue stream for fracking companies.

“Gerasymovych realized that Bitcoin miners and shale companies could both benefit from utilizing the flare gas,” the article said further. “Instead of burning it, Gerasymovych proposed using generators to convert the flare emissions into electricity. In turn, this is then used to power Bitcoin mining equipment.”