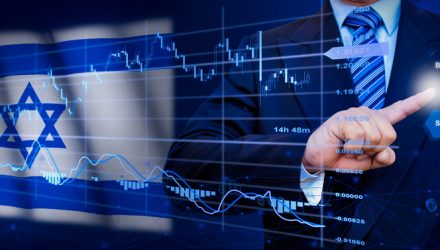 Israel is one of the more compelling developed markets investment destinations outside the U.S., but only a modest number of exchange traded funds offer dedicated exposure to Israeli equities.

The VanEck Vectors Israel ETF (ISRA) is one of the more venerable members of the cadre of U.S.-listed Israel ETFs. ISRA, which tracks the BlueStar Israel Global Index, turns nine years old in June. ISRA is a relevant consideration for investors considering Israel exposure because for all the country’s favorable traits, it’s not heavily represented in traditional developed markets indexes.

Adding to the case for ISRA is the fact that it’s reflective of the tech-centric nature of the Israeli economy – one that’s often dubbed “startup nation.” The VanEck ETF allocates 38.9% of its weight to technology stocks, as of the end of February, according to issuer data.

That’s an overweight to tech of more than 1,000 basis points relative to the MSCI Israel Index. Plus, there’s ample room for growth in the Israeli tech sector, and investments reflect as much.

“Israel’s private technology sector has continued to receive interest from global venture capital and private equity investors. The sector received about $26 billion in venture capital dollars in 2021, almost double the amount raised in 2020, and about a quarter of the funding received by Europe as a whole,” adds Bokhari.

“Similarly in 2021, IPOs saw explosive growth relative to 2020, as 121 Israeli companies with a total valuation of more than $87 billion went public across the globe, versus 27 companies in the prior year,” concludes Bokhari. “MVIS Bluestar Israel Global Index added exposure to some of these companies in 2021. Israel appears to offer a robust pipeline of multi-billion dollar IPOs that will be a boon to its capital markets.”