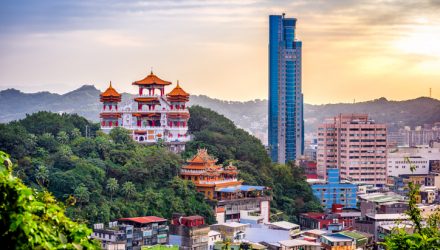 Good News Is Priced in, but Taiwan ETFs Can Climb Higher

Taiwan’s markets could extend their rally if past moves after an election are any indication. The benchmark Taiex index has returned an average of 7.4% in the 30 days following the results of the previous six presidential elections in response to fading political risks. Furthermore, the planned signing of an initial trade accord between China and the U.S. is also expected to further diminish global trade fears and add to Taiwan’s momentum.

“The No. 3 emerging market by capitalization, Taiwan is the embodiment of the export-driven development model. Taiwan Semi and Hon Hai account for 30% of the equities index between them,” reports Craig Mellow for Barron’s. “Half of the rest comes from less well-known but still essential tech players like integrated-circuits maker MediaTek (2454.Taiwan) and camera-lens supplier Largan Precision (3008.Taiwan).”

Although the U.S. and China have signed Phase I of a trade deal, Taiwan remains an appealing option for companies looking to diversify Asian manufacturing away from China.

Some Asian economies could capitalize on a redeployment of investment capital from wary companies that are operating in China but are looking to diversify away from the trade uncertainty. According to a recent survey conducted by the American Chamber of Commerce in South China, around 70% of companies are considering relocating some or all of their manufacturing out of China, with Southeast Asia indicated as the preferred destination.

“The trade war has so far benefited Taiwan as its powerhouse companies restored production away from the mainland, says Angela Hsieh, Korea, and Taiwan economist at Barclay’s,” according to Barron’s. “Reshoring added 1.6% to the gross domestic product, she estimates, driven by a 21% increase in information and communications products. That more than offset the costs of a tourism boycott Beijing unleashed last summer.”

Making Taiwan appealing for risk-averse emerging markets investors is the market’s reputation for being less volatile than other developing economies. EWT’s three-year standard deviation of 13.92% is low compared to many single-country emerging markets funds.